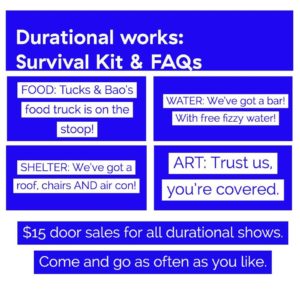 With the official announcement of Nisha Madhan as the new programming coordinator of Basement Theatre, it seems appropriate that the 2020 Auckland Fringe Basement Programme (her first Fringe in this position) has her artistic fingerprints all over it. In a continuation of Gabrielle Vincent’s established legacy of the annual Basement provocation, Madhan has stepped up to the plate with what might be the fringiest challenge yet: a season of durational theatre.

For those drawing a blank, previous years have included the Basement Salon, 1-on-1 shows, and the Ghent Manifesto. And even if these provocations weren’t always about targeting huge audiences, they more than made up for the lack of bums on seats with a sense of artistic risk-taking. And, as someone who has participated in many of these provocations, I think it’s safe to say it has become a space where the right provocation acts as a powerful catalyst to create a work that might never have existed otherwise. My own work I Am Rachel Chu certainly would not have been made without the aforementioned Ghent Manifesto.

Our finest and most experienced practitioners of duration-based work are probably Binge Culture, most notably with their six hour Break Up (We Need To Talk). It was a sprawling, adventurous and visibly exhausting piece of theatre, drawing out a semi-improvised (as per the title) break up. I remember witnessing it and responding to it with bewilderment. But, despite my initial reactions, it remains one of the most memorable theatre experiences I’ve had the pleasure of sitting through. In the gentlest, unexpected ways, it challenged my young theatre-going brain and my notions of what theatre should look, sound and feel like. It “went pretty unnoticed in New Zealand,” as Madhan notes, “but blew up in Edinburgh earning a TOTAL theatre award nomination.” (Yes that is sort of a big deal.)

The prospect of sitting through that much theatre may seem intimidating to some, but these particular duration-based works are designed for audiences to come and go as they please. Madhan insists that “you quickly become absorbed and addicted to the game. Time runs away with you, believe me. You can barely bear to leave just in case you miss out on something!”

If in conventional playwriting narrative is king, because it’s about controlling audience expectation, durational performance is about letting go of control entirely. “Exhausting yourself so that you get out of the way of yourself,” as Madhan beautifully puts it. “It encourages the kind of vulnerability that you can only experience after running a marathon or arguing all night long. It’s more akin to a piece of art in a gallery. The challenge is to let it be. Leave it alone.”

And it’s safe to say that none of the performances indulge in the expectations of traditional narrative. At most, we have micro-narratives (apologies or infomercials) on repeat. Or a single action stretched out over a period of time (cleaning).

So, what about the shows? There are five of them, all for one night only, that take place over the two week window of Auckland Fringe, all upstairs in the Basement Studio. I briefly interviewed each of the teams for some more details and insights about their productions:

It is based on Gibson’s experience “practicing art in Auckland and from those around me who feel as though they are stuck in a never ending grind.” He describes it as a “cross between a call centre and a motivational conference.”

As the team with what might be the highest pedigree, Just One More ensures that the season of duration starts off with a bang. Gibson is one of my personal favourite performers, who has flexed his acting muscles with an impressively broad body of work. He can dance (Owls Do Cry), he can play killer and lover all in one (Court Theatre’s The Events), and he is one helluva clown too (Thomus). McCormack has an even more embarrassingly rich CV, being an arts laureate and having worked with the legendary Douglas Wright.

Now I get to introduce my own show, the concept which is taken from my co-creator (and one of the performers) George Fenn’s own show How to Apology. I’m directing the show and have a pretty decent track record as an award-winning playwright. And Fenn is a talented improv artist with more than a handful of solo shows under his belt.

The premise is simple: using a series of prompts, three actors attempt to apologise for any and every scenario you can think of over four hours. The situations I’ve composed are a little outside the box, containing some of the usual suspects as well as some left-field ones. The result is a sort of guided improvisation. I almost guarantee it is going to be funny, moving and even a little bit shocking. At worst, you will leave the show with a better insight on how these three people tick. At best, you might leave inspired to pick up the phone and call an old friend. Come for the catharsis or stay for the schadenfreude.

The other performers, Ravikanth Gurunathan (A Fine Balance, Take the Crown) and fellow Theatre Scenes critic-director Rachael Longshaw-Park (An Organ of Soft Tissue, Dr Drama Makes a Show) are also no slouches either.

Featuring a bath full of jelly and a confrontation with fatphobia, Alice Kiker’s Jelly Baby has the distinctly rebellious and experimental nature of the fringiest of Fringe shows. It’s performance art meeting theatre in the ways that the Basement has become more well known for over the last few years, moving further and further away from the programming of narrative dramas.

Kirker promises an “insight into the fat experience. And hopefully some glorious fat folk will get to see themselves represented and feel great about that… I think people have responded really well to the idea of making a show about Fat. That word is still a controversial one, and carries a lot of weight, and so for people to see it used in such an outright way has definitely created a little buzz.”

Her company The Oddballs, premiered their work Fleshies last year. Jelly Baby strikes me as a continuation of that work, though zoomed in on Kirker’s specific experience and body, then elongated over a four hour period for added effect. The body as an autobiography.

If that doesn’t get you excited, I don’t know what will. The Infomercial Project was originally devised under the mentorship of genre-shaping theatremaker Julia Croft during the team’s time studying at The Actor’s Program. What originated in a ten-minute format has now been stretched into a delicious four hours. It sounds simple enough: two actors perform an infomercial over and over for four hours.

The effect repetition has on performance might be the most exposed and exciting element here. Like watching an acting exercise on crack, it probably invites before and after photos of the cast the most of any of the duration shows. Director Jordan Dickson says audiences should expect to see “two individuals surrendering to the monotonous chaos of capitalism and relishing in the madness.

As someone who gets intensely nostalgic flashbacks to late nights watching infomercials, I can’t wait to see how his cast unravel.

I’ve seen women insist on cleaning everything in the house before they could sit down to write… and you know it’s a funny thing about housecleaning… it never comes to an end. Perfect way to stop a woman. A woman must be careful to not allow over-responsibility to steal her necessary creative rests, riffs, and raptures. She simply must put her foot down and say no to half of what she believes she “should” be doing. Art is not meant to be created in stolen moments only.

Inspired by the Clarissa Pinkola Estes’ quote above, Cleaning the Room has a meditative sounding quality to it. If the preceding duration performances seem to invite chaos or confrontation, this one seems absolutely Zen Buddhist by comparison. The ideal palette cleanser to anyone brave enough to do all five shows.

Olivia Mahood (co-creator alongside Poppy Serano) says, “In some ways, the audience faces a similar challenge to that of the performer. It is an exercise in staying with something for a long time, sometimes beyond comfort.”

Talking to some of the artists, concerns over the sellability of the four hour duration has proved somewhat tricky. This is art that is inherently anti-profit and anti-clickbait. This is art that asks you to sit down, slow down. It might not have the bells and whistles of a big theatre event, but it certainly feels like a once in a lifetime opportunity. Who knows when a provocation like this will come again?  I certainly have concerns that it’ll simply pass audiences by unnoticed, but maybe I’ll end how I began, by calling on Basement Programming Coordinator Nisha Madhan’s very own words:

“I hope that Auckland audiences don’t do that Auckland thing where they only watch their friends, or sit at home lamenting a lack of cool, interesting stuff to go to and experience, when it’s right here.  It’s under your nose. Get out of the house, support independent artists, experience something new. What’s the worst that could happen?!”

Basement Theatre Season of Duration begins this Thursday 27 March. Each show runs from 6pm to 10pm, and audiences can come and go as they like.