If you’re looking to see a show with balls Boys’ Life is definitely it.

The play follows the drunken, nihilistic excesses of three American youths through their quest to embrace responsibility, seek partnership and come to a realisation of their place in the world.

Boys’ Life reminds the audience of their journey from adolescent confused flirtation to ultimate attempts to dignify a life.

It’s about the relationship of three urban guys who essentially refuse to grow up.

The show starts when the lights come up and the cast runs around the stage in a frenzy cleverly strewing bits of attire all over the floor and furniture.

Dominated by a big queen sized bed in the middle of the set, the simple but effective set bears the hallmark of John Parker’s well thought out design,using the cast to move random bits of ‘window dressing’ around unobtrusively.

The play is narrated through the 1970s and 80s by a familiar soundtrack and of hits of the day. The soundscape excellently enhances and punctuates the slickly changing scenes and locations (Interesting that no one is credited for this in the program).

The brilliant writing seesaws between poignancy and hilarity, whackiness and deep understanding. There are great and memorable lines throughout the play but the one that I can’t get out of my mind is said by Lisa (Toni Rowe) as the cheated-on girlfriend to her errant repentant boyfriend Don: “You just keep getting your dick stuck in things”.

Under the skilful direction of Sam Shore, the overall pacing is great but with a reasonably long play such as Boys’ Life I’d probably like to see a little more movement and character interaction to enhance some of the longer dialogues.

The snappy banter is complemented by Brad Gledhill’s crisp and effective lighting design – with blackouts between scenes, giving the show texture.

It’s extremely refreshing to watch a play ‘for men about men’where the male characters are the stars and the female roles are purposely more one-dimensional, providing the perfect foil supporting the leads. Delightful female characters include a sexy jogger (Jacqui Nauman), a half-naked nutter (Sarah Graham), waitress/sculptresses (Rowe) and (in the boys’ view) a ‘damaged goods’ character played superbly by Nicole Jorgenson.

The enthusiasm and familiarity of the cast is infectious and talent abounds.  You can see they are having fun and have put heart and soul into this production.

Although the male audience members appeared to be totally sucked in throughout the show, I must admit that I noticed a number of women looking somewhat nonchalant at times.  But they were quickly reinvigoratedby the witty one-liners and repartee, including the fantastical story that Don recounts to his girlfriend Lisa following his blatant infidelity, leaving everyone in stitches.

Overall the show is a winner.

And in my husband’s view a bit of nudity should be encouraged in the arts – “especially when saucy birds show you their jugs,” he says.   These however need no support, but innovative theatre companies definitely do.   So go and see them (oops I mean the show).  And for the lads, my husband’s apt parting comment is:  “Phwoaaaarrrhh!!!”

Boys’ Life is presented by The Outfit Theatre Company and plays at The Basement until April 23.

More information at the The Outfit Theatre Company website.

REVIEW: Much Ado about Nothing (Summer Shakespeare) 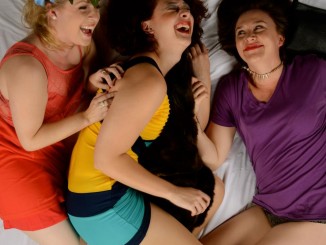