A show worth fighting for [by Matt Baker]

Starting nearly half an hour late can result in an immediate uphill battle for a performer, but, with an enthusiastic energy and true showmanship, David Ladderman quickly has us on his side in his one-man show Battle of the Bastards. The show focuses on the sub-plot to King Lear, namely, the events surrounding Gloucester, Edgar, and Edmund, as initiated by a letter from the latter. Ladderman incorporates the letter motif nicely both in content and style, and addresses and performs the key scenarios they incur.

A few other props, the style element of which Ladderman humoursly addresses, add to the simple spectacle element of the show, which includes a good use of side-lighting to capture the physicality of the performance. There’s some audience participation, and although some of the more vocal audience members didn’t know when to stop, Ladderman took it all in stride and pushed through for a great-paced 50 minute show.

Ladderman clearly has a solid grasp of Shakespeare, and although the transition from shtick to scene is a bit jarring at times, it’s incredibly easy to follow. Add to this a few show mantras to keep the audience both vocal and engaged, and one can only conclude that Ladderman has taken what are some of the most enjoyable speeches for an actor and managed to make an equally enjoyable show out of them. As he says himself, “I wrote the show for myself, but I had you (the audience) in mind when I wrote it.” The proof is evident, in that regardless of your knowledge of King Lear, or Shakespeare in general, Ladderman has created an incredibly accessible show for audiences of all ages. 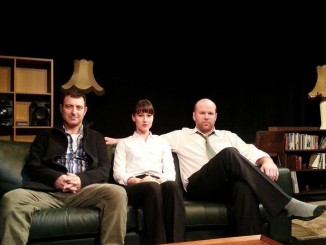