The Fame Monster [by James Wenley]

There’s commentary within this show about the difference between celebrity and stardom. Celebrity is flash in the pan stuff. Stardom is enduring. You counted. People remember. Movie femme fatale Veronica Lake has the ingredients for stardom – a troubled back-story, ambition, a face that lights up the screens. She was very much a screen celebrity of the 1940s. But a star? She died, age 50, her career long behind her, in near obscurity. That’s a long way to fall.

Veronica Lake, real name Constance Frances Marie Ockelman, was most famous in her heyday for her studio constructed trademark ‘peek-a-boo’ hairstyle covering her right eye. She appeared in films like Sullivan’s Travels and The Black Dahlia. Now, she’s a screen siren curio, known mainly to the biggest movie buffs. I’ve never seen any of her films. I hadn’t heard of her until this play, Drowning in Veronica Lake, reached my consciousness.

The local creative team led by Director Simon Coleman, have rediscovered Lake and found in her rise and fall story wider resonances on fame and image. While the show employs great use of juicy biographical information, relayed by Veronica (Alex Ellis) herself, hers is a story we have largely heard before. A young ingénue embraced by the Hollywood and fame system, built up, celebrated, then spat out: she blamed her diminishing career prospects on the series of bad films the studio placed her in. On the way she had four marriages and an increasing dependence on the alcohol. She burned brightly, but briefly.  In her we might be reminded of the Marilyns, or latter day Britneys or Lindsays. How do you remain a real person under the weight of fame? And what happens… when it’s gone?

This productions’ masterstroke is the elegantly simple framework it uses in telling this version of Lake’s story: a framework that takes the form of a long billowing white dress that just keeps going, taking up much of the floor space, surrounding her. Ellis as Lake is already in position when the doors open, back to us, her garment impossible to ignore. The Dress is the big talking point about this production, and Sara Talor and Elizabeth Whiting well deserving of its plaudits. Floor lights surround it, and some beautiful scenic tones are created within it (Lighting Design Nik Janiurek). Well placed psychological transitions see Ellis trying to escape from out of it, as if shedding her image, but she can only fall and get back up again. By the end of the play the dress has retreated into itself, those floor lights marking the former boundary, a pointed image for Lake’s own collapse.

But perhaps more awe worthy is Ellis’ performance who is unrecognisable as Lake . I can’t judge the veracity of her mimicry of Lake (they acknowledge Ellis’ height is vastly different to petite Lake), but you totally buy into her and hang on the edge of her words. Not only does Ellis switch into different characters (like Lake’s Mother desperately taking over to try and tell the ‘complete’ story), Ellis gives us many different versions of Lake herself; the innocent, the damaged, the unstoppable, the demure, the victim, the bitch. Constance. Veronica.

She’s upfront about the illusion and fakery of ‘Veronica’ – wow them with an opening song she tells us, but let’s not mention that it’s not her voice singing it – and frank about her abilities as actress, though later it doesn’t stop her yearning for proving herself as a real actress on the stage. We realise soon too that as much as we are enjoying this storyteller’s tale, she’s unreliable, at times hiding the truth and hiding from us, rewriting her tale to keep her shine. And though she wants to gloss over her flaws, the gaps soon show. The program says most of the stories are dubious and “almost all of them conflicting”. Writer Phil Ormsby has done a remarkable job of sifting through the facts and myths to create this version, while still teasing out enough ambiguity.

I’d wantedto see Drowning in Veronica Lake ever since I missed it in 2011 Fringe Festival busy-ness. Sharu Delilkan’s original review has been one of our most popular reviews on our site as the show travelled across the country and over to Australia too. Now in its final days for its return season, it was worth the wait.

We shake our heads at fame – both at the system, and Lake’s manipulation of it. And we watch, fascinated. Briefly, Veronica Lake lives in front of us. Briefly, a star.

* I loved too the end device post-bow that both acknowledged the illusion of theatre, and kept Veronica’s illusion alive. But to know what I’m talking about, you’ll just have to see it.

Drowning in Veronica Lake is presented by Flaxworks and plays at Q Loft until 1st Septmber. More details see Q. 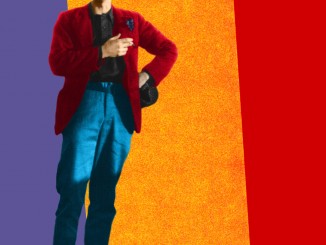 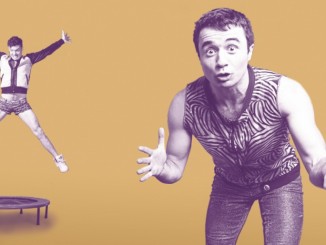