Fools Suffering Gladly is a neat little collision of styles. Or is it a collusion of styles? Either way, it works.

The show opens with a ‘re-enactment’ of how Ashton Brown and Richard Lindesay met. What ensues is a glorious train wreck, with both comedians failing to jibe with each other’s comic stylings.

Lindesay is a one liner machine. Don’t expect theatrics — it’s all in the words. And the pictures. Trying to recall memorable lines is impossible. They’re all that good. There was a good one about Bali.

Brown comes onstage and does a dance number without his shirt on. It’s sexier than Magic Mike and a Babyface video combined. He tells stories about a variety of subjects: karma, life, bad sex, alcohol, dieting and Rainbows End. The usual.

Though their styles are completely different, their sets are both tight. There is no dead air and no lulls between belly laughs. These guys know exactly what they are doing. They even took turns at blowing a noisy heckler out of the water.

Hopefully, Brown and Lindesay continue their partnership after the festival. Their interplay is terrific, and another hour of that would be gold. 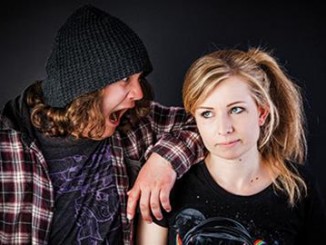