“Change, shit / I guess change is good for any of us” begins Tupac’s 1996 anthem ‘I Ain’t Mad at Cha’. Tupac answers his haters – critical of his ghetto-to-celebrity journey – by turning the other cheek. Even though he keeps a glock beside his head for protection from friends turned against him, “I ain’t mad at cha”, he insists. While the lyrics are full of the derogatory and misogynistic language that the artform is often criticised for, this is Tupac at his chillest – nostalgic for his challenging past in the hood, but accepting the mutability of existence. The music video for this song was the final one that he filmed, before he was murdered that same year.

“I ain’t mad at cha” is a refrain adopted by Kiwa (Ngahiriwa Rauhina), a rangatahi obsessed with rap, in Turene Jones’ play of the same name. In his voice, it becomes an affectionate catchphrase, one he might say to his brother Ash (James Jennings), schoolmate Jamal (Ravi Gurunathan) and Isabel (Timothea Cameron), the girl-he-is-seeing (the ‘girlfriend’ label freaks him out). “I ain’t mad at cha”, he offers lightly, a sly grin on his face.

A painting of Tupac himself looks out to us from a screen at the back of the set, akin to a modern-day saint. Next to him is a large union jack, painted black on white. These are the dominant forces that shape Kiwa’s teen existence – hip hop, and colonialism (no need to add the post). Set in 1999, Tupac and Biggie are at the centre of Kiwa’s musical world, having increased even further in myth and mana posthumously. White boys have started rapping too – Slim Shady is on the up – so why not Māori? Ash can’t understand his brother’s mania for the music – they’re not black, the culture ain’t there’s, so why pretend to be a “ghetto gangster?”. But as Jamal says, rap crosses all racial barriers.

We open with a scene of schoolyard status politics, as Kiwa and Jamal trade “your mum” barbs – the lowest hanging fruit of boyish insults. But things really heat up when they begin spitting fire. Kiwa is on the offensive with a powerhouse set, building himself up while taking others down. But Jamal, who reclaims a racist taunt to become “MC Currymuncher”, enlists the other students to join his team – a breach of battle etiquette according to Kiwa.

But, “I ain’t mad at cha”, as Tupac says. Yet, this phrase also contains its negation – we can see that Kiwa has a lot he could be mad about. There’s the pressure from his mother, Aira (Moana Johnson) who doesn’t want him “to grow up like every Māori round here”. Her worry comes from love and concern, but Kiwa internalises her fear, and the implicit message that the cards are stacked against him – and if he does stuff up, that would only be fulfilling his destiny anyway as a Māori living in Gizzy. Unlike what Tupac said, not all change is good; he doesn’t want to become a stereotype, but Kiwa feels the weight of other people’s perceptions of him, which all too often are negative. Hip hop’s message of the rage against oppression, and the struggle to get out of the ghetto, seems to speak to him intuitively. He himself wields the form as a pinnacle of his self-expression. When in the flow of rap he is brilliant, articulate and wise, showcasing his creative potential and laying bare his biggest vulnerabilities in an attempt to neutralise them.

Tupac’s phrase contains another statement, fundamental to Kiwa’s defiance of the odds: “I ain’t mad”. Through other people’s eyes, Kiwa’s actions might make it seem like he is. But as we follow him episodically over the play – from negotiating the faltering relationship with his not-girlfriend, to introducing his brother to drugs, to having the cops called on him – we gain deep insight into the forces shaping Kiwa’s reactions. He’s “used to people saying this racism all in our heads”, but we can see the insanity of the negative bias and prejudice in how other’s treat him.

The central incident relates to Kiwa’s brush with the law. Racial double standards are highlighted when Jamal’s dairy owning father, Mr Raju (also Ravi Gurunathan), accuses Kiwa of trying to shoplift a magazine he was reading, despite not making a similar complaint against a Pākehā customer doing the same thing moments earlier. Kiwa is indignant, and a heated argument (and a rap) ensues. It’s a key scene for Jones’ play, a sensitive treatment of conflict between Māori and minority tauiwi, both caught in the colonialist bind, made suspicious of each other.

Afterwards, Kiwi and Ash are interrogated by their Uncle Hamu (Wolfgang Schmidt), a police offer, who declares “I’ve heard enough” before the boys have barely even started explaining what happened. This character reveals a fissure within Māoridom, with Hamu drawing a simplistic division between good and bad Māori, with the bad ones needing to be locked up so they can stop giving all of them a bad name (Hamu, of course, considers himself one of the good ones). Jones raises questions for both tangata whenua and migrant communities of the extent you can conform with Pākehā dominated systems, and the need for internal decolonisation.

The focus of the play is further enlarged in a revealing argument between Hamu and Aira, providing us insights into the very similar issues facing Kiwa that affected them during their formative years. The cycles go back, and the cycles, to all our shame, go forward.

Turene Jones began writing I Ain’t Mad at Cha as part of her Drama Honours at the University of Auckland. It was a finalist in Playmarket’s before 25 competition in 2016, and went on to gain Brown Ink support, where most of the cast were introduced to the script. As WAITĪ Productions they debuted the play in the Basement Studio during Matariki last year (the production went on to win the People’s Choice award for best play by emerging artists at the Auckland Theatre awards, and Jones won the Ngā Manu Pīrere award for outstanding emerging Māori artist for CNZ’s Te Waka Toi Awards. WAITĪ Productions have now returned (with some cast changes) to the Basement Theatre with a powerful purpose – not only have they been performing a two-week season on the mainstage, but have also concurrently been touring to 7 low decile schools around Tamaki Makarau.

It is thematically fitting, perhaps, that in the show’s current form, it feels like I Ain’t Mad At Cha is having something of an identity crisis. How far in should it go as a rap musical?  Each of the cast wrote their own raps with original music by Soul Chef. It results in a sometimes uneasy tension between Jones’s insightful book and the breaks into verse. The raps are definite highpoints – the opening battle comes out strong, but just wait for the closing rematch! Those two, as well as one between the brothers, emerge from the diagetic world of the play. The play also contains raps, like the one between Kiwa and Isabel during a crisis point in their relationship, which take their cue from non-diagetic musical theatre convention. The Kiwa/Isabel one works up until the point that the rap finishes – the character’s return to dialogue undercuts the tense emotion just when we needed to keep building to the scene’s revelatory climax. These ‘fantasy’ rap scenes are not helped by the obtrusive lighting state changes, which announce the impending rap monologue/duet a number of beats before they hit.

At one point the characters reflexively joke that this is not a rap musical, but ‘real life’, but perhaps further iterations of the show (and if there is justice in the theatre world, this show will have a long life) might further pursue the logic of this form – there are other heightened emotional moments too that a ‘break into rap’ could serve that Jones and the company might explore together. Why not go all in?

The current ending also comes across as tonally off, the play finishing a scene too short – one more coda with the brothers might provide a firmer beat to end on, rather than the current feeling of a track fading out.

The cast perform the raps without microphone support. While we lose some of the crispness of the lyrics, the performances are authentic and confident. The cast mostly play characters younger than their own ages, which they energetically pull off. Johnson has the more difficult challenge of going older, and the believability of her character is a greater stretch. Jatinder Singh uses both his director and set designer hats to deftly move us through the action and locations.

The play’s turn of the millennium setting signals the hope of a new generation making a break from the past. From our contemporary seats, this provides both nostalgia and poignancy. We might like to think there’s been progress, but we need only look at the messages emerging from the Criminal Justice summit to see how not enough has changed over the past two decades; the damning fact is that our country’s gross over-representation in Māori incarceration rates has not shifted (and in 2017, new prisoners were more likely to be Māori than at any time before). We are reminded that there are Kiwa’s right now battling to win with the poor hand they have been dealt, and it is not a battle that we should leave them to fight alone.

“Why can’t you just be on our side for once?” asks Kiwa. I Ain’t Mad At Cha takes a powerful stand for empathy, the promise of rangatahi, and for Aotearoa to finally sort out its shit. That kind of change is good for all of us.

I Ain’t Mad At Cha is presented by WAITĪ Productions and plays at The Basement until 25 August. 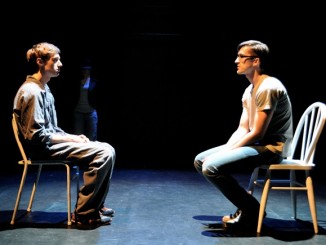