Loud & Queer is unapologetic agitprop. It feels like a blast of cold water that rails against the ways in which queer experience and identities have been homogenised  and commercialised for the masses.

A mix of comedy, skits and poetry, the show is messy, angry and comes out punching.

Last year, I reviewed The Hook-Up Boys, a pretty funny show about gay relationships and one night stands. I did criticise it for perpetuating the focus on good looking white guys.

This show’s multifaceted cast (Dominique DeCoco, Teddy Mason, Joni Nelson, Manu Vaea and Nate Villanueva) cover a broad range of voices that we frankly do not see enough, in the public sphere (on or offstage).

Directed by Sarah Jansen, it’s all very spare and a bit punk rock. Composed of short, punchy scenes, it blasts through a variety of targets — the lack of representation, the half-assed support from armchair liberals, the meaningless slogans, the on-going cycle of familial isolation, religious persecution, social and economic exclusion.

Buoyed by the cast’s energetic performances, and a lacerating sense of humour, Loud & Queer never feels laboured or didactic.

Worth a look. And a think.

Loud & Queer is presented by Breaking Boundaries and plays at The Basement until 17 Feb. Details see Auckland Pride. 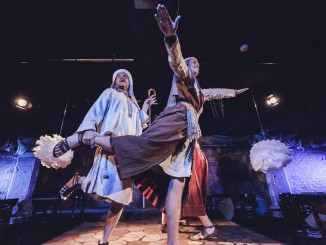