Created by Auckland-based cirque-theatre company the Dust Palace, The Wonderwombs is a tantalising performance of aerial acrobatics, challenging our perceptions of womanhood.

Curiosity begins as soon as we take out seats. Hanging from the ceiling of Q theatre are various innocuous pastel pink objects – a rubber glove, a child’s fortune-teller game – and items move towards our grasp. Then the dark space is flooded with light as six performers move across the stage with robotic precision, arms raised in praise of an oversized silver apple.

A slow opening gives way to mayhem when, under the gown of a pregnant character, a large purple balloon fills with air. Performer Adam Rohe takes on the task of delivering her ‘baby’ before it pops, and is congratulated for his feat. Within this chaotic introduction, each performer presents themselves to the audience with unique ‘femininity’ – a hyper sexualised, doll-like gaze contrasts with the body language of masculinity; muscles held with tension, to showcase an impressive physique.

Adam acts as MC, welcoming us into a warehouse of doll-like women who are due to be upgraded. He asks what we’d like to trade (‘perhaps the gender pay gap?’) and the fluorescent pink lycra-clad dolls are impressively carried off on the shoulders of one of the ‘workers.’

Eve Gordon, Rochelle Mangan, Bethany St John, Jaine Mieka and Ariel Cronin demonstrate exceptional skill, agility and poise as they take to the air above the stage – in solo and double acts using aerial silks, rope, hoop and pole. A carefully curated soundtrack, filled with references to the female anatomy, gives each performance a different tone. The sensual, tear-jerking double act juxtaposes the agitated movements of Ariel Cronin on a rope as she depicts a sexual assault.

A dazzling pole-fitness performance by Rochelle Mangan is cut short when her fellow performers cover her body in an oversized sheet, desperate to save her from view, because she is ‘too pretty to be doing that with her body.’

After each performance, further small vignettes remind us of the night’s purpose: ‘to explore intoxicating muscularity over toxic masculinity.’ Our MC Adam explores his own experiences, and what it means to be a trans man: crossing over to the other side and ‘being given a power you don’t understand how to wield.’ On the premise of the audience being nosy, the section concludes with full frontal nudity in a moment of wild celebration.

Further acts of nudity (expressed as a warning in the show notes) are used to create a comedic commentary on the differing attitudes towards the male and female anatomy.  Characters with masculine attributes peacock in a gym as they flex and tone, then strip off to their smalls without censorship.

As the performance concludes, a rallying speech on femininity is delivered by a character who previously struggled to utter a single word, but who manages to speak up over the cacophony of a sex noise orchestra.

Alongside original Director Jess Holly-Bates and Hannah Tasker-Poland, it is clear the cast worked hard to devise a variety of light-hearted and thought-provoking material. Audience members are left pondering the heady whirlwind of giant wafting underwear, body contortion and the far-off calls of seagull penises… a delightful evening, and a seemingly-effortless acrobatic call to action.

The WonderWombs plays at Q Theatre until 21 December. 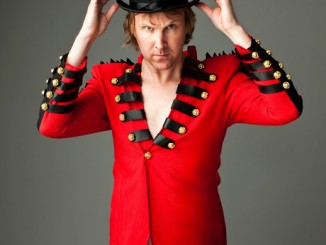 2 Comments on REVIEW: The WonderWombs (The Dust Palace)