Putting on a production that truly pays homage to Michael Jackson a.k.a. the King of Pop is a daunting task, to say the least. Bearing that in mind I decided to go to the show with low expectations, to ensure that I wasn’t disappointed. However I was pleasantly surprised by the entire production, including the singing, dancing, i.e. the overall top-notch quality that we were treated to on the Civic stage.

In the first instance credit should go to the executive director Adrian Grant for the original concept of Thriller Live and for making his vision a reality. It is evident that the show is a labour of love that has taken a lot of planning, research and no doubt hours of blood sweat and tears to ensure an amazingly high standard.

Unfortunately it would take too long to individually mention all the talented people, 45 international performers, musicians and crew, responsible for this memorable production. Everyone in the creative team as well as the performers themselves were key in creating this tremendous spectacle. However special mention must be made to director/choreographer Gary Lloyd for realising Grant‘s grandiose vision and for his stunning choreography which shines throughout.

All the lead vocalist were in perfect voice throughout. There was only one section I could fault where Wayne Robinson didn’t seem to have not had enough time to catch his breath, possibly due to not being given enough time between his dance moves and having to belt out a tune. But that is literally a drop in the proverbial ocean of magnificence that is Thriller Live. Lead vocalist Prinnie Stevens was fabulous from the minute she graced us with her presence. To be honest I was a little surprised that she had been cast as one of Michael’s ‘voices’ but after hearing her interminable vocal range I can see why she was pivotal to ensure the success of this production.

Personally I felt a couple of the singers lead vocalists, i.e. Alex Buchanan and Sean Christopher, were slightly under-utilised, especially during the first half of the show. This was a bit concerning since both of them had such MJ-esque voices. It seemed like a waste not to have showcased their obvious talent more.

The selection of songs chosen was indeed a great tribute to one of the music industry’s greatest talents and provided a great historical catalogue of MJ’s amazing hits throughout the ages. Songs played included I Want You Back, ABC, Can You Feel It, Off The Wall, The Way You Make Me Feel, Smooth Criminal, Beat It, Billie Jean, Dirty Diana, Bad, Rock With You, They Don’t care About Us, Dangerous, Heal The World, and of course Thriller. I would have been even happier if one of my favourite Jackson Five‘s songs Ben had been featured – but I realise it’s impossible to please everyone.

Saving Thriller for the encore and not including it in the main part of the concert was a great call. It added to the excitement in the air as everyone stomped their feet demanding a comeback on stage.

Once again the music, singing and movement of this much-awaited song was absolutely brilliant. Unfortunately I felt the lighting could have been a little better. Historically the reveal when the humans transform into zombies is a big deal and part of the shock element of the Thriller video. So I was a little bit disappointed that there was no spotlight on their faces for us to see this ‘shocking’ transformation from human to zombie. It may have been apparent in the front rows but from where I was sitting in the Circle the dramatic visual effect of the song was sorely lacking, making the much-anticipated piece a tad less dramatic.

All commentary aside there is not denying the slickness of Thriller Live. The spectacular concert production aptly celebrated the music of the world’s greatest entertainer, Michael Jackson and the legendary Jackson Five. It’s no surprise that Thriller Live has played in London’s West End since 2009, and has entered the record books as the 20th longest running musical in West End history.

As billed, Thriller Live is over two hours of non-stop hits from pop to rock, soul to disco in a show that pays great homage to Jackson’s legendary live performances and his magical 45-year musical history. And it was amazing to see how densley packed the whole show was – moving with the precision of an army drill.

We all know Michael’s innovative dance moves have left an indelible mark in history so it was indeed a delight to see these moves replicated with such panache and meticulousness by the talented performers on stage, including the moonwalk and the anti-gravity lean.

Whether you’re an MJ fan or not – this is definitely one show not to be missed! 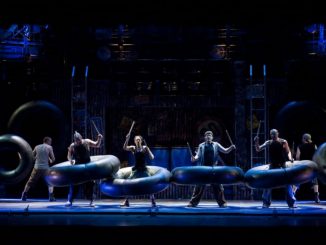