The Adventures of Alvin Sputnik: Deep Sea Explorer is set in a (not so?) fictional future where the seas have risen and billions of people have died. For the few that remain, they must look to the oceans for the continued survival of the human race. Alvin Sputnik, who is brought to life through puppetry, animation, and a live performance by Tim Watts (a ‘one-man micro-epic puppet show’), joins a last ditch effort to find a place under the ocean where the survivors can live.

The show’s Perth (the most isolated city on Earth) creator did not imagine that his premise of extreme climate change would become so poignant after the recent natural disasters across Australia. “I just did it at the Sydney Festival at the time of the floods and it was a little bit more close to home then I had sort of intended” says Tim. “I was a bit worried that people were maybe going to maybe find it to be insensitive, but it was fine. I think it just made it more poignant than insensitive”.

Tim wanted to create a show that acknowledged the environmental situation and his strong views on the subject, but did not want to preach to the audience. “By putting it in the future so far, and having things go to such ridiculous extremes, such as there being no land left whatsoever, and people sort of tragic-comically clinging to survival, it would take it out of the realm of the everyday and preaching to people about recycling.” “The ocean itself is one of the things that is suffering quite a lot, it’s bizarre, BIZARRE, to think of the fact that there might not be any fish left because they are overfished, it’s just absolutely mind-blowing to me.” Tim acknowledges it can be difficult to know what personal choices to make to combat climate change – “What you eat, or what you wear, or what to anything, what to buy – I personally get very overwhelmed.” “I’ve got this show where I’m try to be really environmental with but at the same time I’m flying all over the world”

Tim Watts became a deep sea documentary junky doing research for the show. “I found something quite inspiring about the resilience of life down there”. “There are these thriving, thriving ecosystems that live without any light whatsoever”.  He explains that every few months an underwater volcano will explode and everything dies, but in few more months life has started again. “It was kind of my attitude that life will continue, but you have to sort of work at it quite hard. Currently my opinion on the whole situation is: do your bit, but don’t lose hope.”

In Alvin Sputnik there is a search for a pocket of air in the ocean where life can survive. It was inspired by the debunked theory (that influenced ‘Journey to the Centre of the Earth’), that through cracks in the tectonic plate you could journey through the earth. In these cracks were sheltered places that still had dinosaurs and ancient races of people “and crazy shit like that”. Adolf Hitler even apparently ordered an expedition to Tibet where it was believed the access point was.

Tim Watts had made the Alvin Sputnik puppet well before creating the show, and had popped him on the shelf.  Friends later approached him to do a show with the puppet, which proved an excellent jumping off point. “He inevitably had to be a deep sea diver, which tied in well because I wanted to make a show that acknowledged the environmental situation; the ocean was a good way to explore that”. It took him a while to find a name for the puppet, but what he came up with was perfect. Sputnik is the name of the first Russian space probe, and the word also apparently means companion “which actually turns out to be quite appropriate because most of the show is about loss and loneliness”. Alvin is one of the main deep sea submersibles and appears in James Cameron documentaries. “Smoosh those two names together and it seemed to suit him quite well”.

For most of the show the character is brought to life through Tim’s puppetry.

He’s curious and wide-eyed because of his main feature; a big wide eye that makes him look very innocent and inquisitive. His wife sadly passes away on the surface, and her soul drifts down to the bottom of the ocean. He tries to swim after it but and bring it back, but he can’t. He watches it sink down and away from him. Then he becomes familiar with this last ditch effort to go to the bottom of the ocean to find a new place to live, this hollow earth, and mainly joins up so he can swim after her soul and try to be with her again. It’s kind of like an Orpheus and Eurydice kind of journey. On the way he has a bunch of adventures and has to do things for the greater good.

For most of the show it’s quite a lonely thing, and that’s one of the images I was returning to a lot when I was making it. I was out at the Great Barrier Reef when I was first coming up with ideas for this show. And that sense of scale, and feeling so little… it’s like looking up at the stars at night sometimes, you just feel so tiny. When I’m swimming to look out into that endless, endless blue ocean… you feel tiny. Most of the journey he’s quite lonely and isolated from everything else. But it is meant to be, and I hope it is, quite a fun and funny show, even though it has some pretty bleak themes.

Can you give me an insight into the art of puppetry and how you use it within the show?

What I’ve sort of come to really like about puppetry is how much the audience have to use their imagination. It means that they are more imaginatively and emotionally involved in the show with the puppets. Something I like about puppets, and I think a lot of people might like about puppets, is that it’s a dead thing, it’s an inanimate object, but it thinks it’s alive. It’s a really endearing thing for a thing to think itself alive, it’s funny when it just does normal things, because you recognise those as your behavior. If you want you can just see it as a ball and a hand, but there’s something that is really special when you stop seeing me, and you just see this creature is alive. It means you’ve performed a kind of magic with your brain.

The show has travelled around Australia, and to New York (winning Outstanding Solo Show in the 2009 Fringe) and India. The Americans responded very emotionally to the sentimentality of the show, and critics compared it to Pixar films. “I think in some ways it’s kind of like a Pixar film, it has a similar feel. That kind of sits with their culture a lot – the fun, but then also having the moments of sentimentally. I don’t think Australians roll their eyes at it but we are generally less affected by it.” In India, audiences were not vocal during the show, but he had people come up afterwards wanting to have intellectual conversations about the themes. He’s also found people of different ages have very different responses to it, from kids who love the puppets to the old who respond to the themes of loss. “I sort of just made it for people like myself, by age range (30s), I usually just make shows I enjoy. But it turned out that it was appropriate for kids, and quite old people… I really try hard for it not to be categorised just as a ‘kids show’; I love all ages, but often when you say ‘All Ages’ they think you mean kids show.”

He’s looking forward to bringing the show here for the Auckland Fringe. “I’m a little bit fresh to the New Zealand theatre scene, I’m hoping to learn a little bit more about it.”

I was very interested to see what Tim would have to say to the central question I posed in my first blog post.

Something I’ve been asking people is the question Why theatre? Why now? What can it do that other mediums can’t? I was interested in your response to that, particularly because your show seems to experiment with puppetry, and new technology like animation.

It is a hard question. It is a good question to always ask yourself. And also, within that whenever you use puppets, it’s important to ask yourself ‘Why Puppets?’, because sometimes things just become gimmicks for the sake of it. Why theatre? There is something very unique about having the audience there live with the live performer.

I did a workshop a couple of years ago, and something that was pointed out, and I don’t know whether I believe this completely, but in theatre you have the performer in front of you. They are a person, and as person they are immediately very complicated beings. So just having a person in front of you can be quite a complicated thing. In film it’s there, it’s printed, it’s in the past, and what’s there is what you get. Whereas when it’s live any numbers of things are possible. There’s a very different energy towards when it’s live, and a person’s there.  I saw a show  called ‘The Boy with Tape on his Face’ (NZ’s own Sam Wills)… freaking great show, real inspirational show for Alvin because that show – it’s very important that its live, and there’s that game with the audience where you don’t know what’s going to happen, and the humour (which is barely even a joke sometimes) is the surprise… all of a sudden the image is there and you weren’t expecting it, so that surprise keeps you intrigued up to the moment where you laugh. I think that game’s more powerful when it’s live, and anything can happen.

There’s something about sustaining that game live with the audience and engaging their imaginations. I don’t really know ‘Why theatre?’ but it’s a little instrument that you play around with, and you try to make fun, and you explore it, and you can never really know all the bits to it or master it completely. It’s an art that I have lots of fun playing around with and seeing what you can do. It’s like music; there always new technologies and new movements that are being invented all the time that you can integrate into theatre like projection, I use a Wii remote in the show. I’m really excited to get one of those new X-Box Connect– there’s lots of cool, cool things you can do with those, particularly live animated puppetry and things like that. All the mediums are great! Theatre is just one that I particularly like exploring and messing around with. 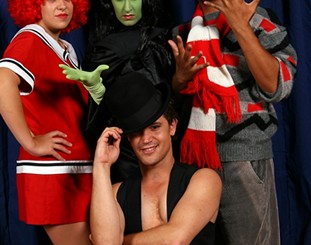 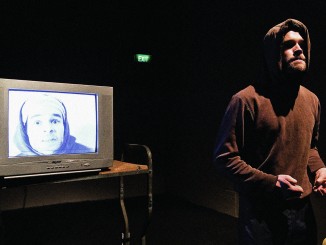 INTERVIEW: Tim Carlsen on One Day Moko and more 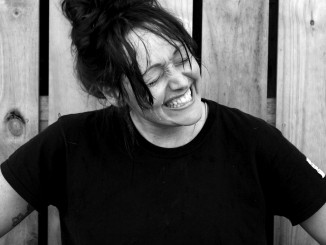