No Shortcuts here [by James Wenley]

I attended A Shortcut to Happiness on Saturday night, the same night as the All Black/ Ireland test.

Stuart Devenie, always a class act, made a pithy reference to the night’s other big event, as his character enters an empty dance studio, save for fretting instructor Natasha (Laura Hill) – Saturday nights are no good for dance, especially when the All Blacks are playing Ireland!

Roger Hall needn’t worry though. As I look around the close to full Sky City Theatre it confirms that any day is a good day for a Roger Hall play, even after over four decades of play writing. Sure, there’s a healthy group of audience members who stand forlornly like puppies outside the Nation’s Clubrooms round the corner from the theatre, to check the score, but they all return for the second half.

The theatre is just one of the many leisure options of the senior set. Forget idle teenagers, it’s the idle seniors, proudly clutching their gold cards, which you have to watch out for. It’s a life of an endless assortment of activities – Golf, bridge, and dancing. And be wary of positively prowling widowed or divorced women on the look out for a man…

For Roger Hall, the play was inspired by author Vicki Baum’s quote “There are a few shortcuts to happiness, and dancing is one of them”, and an international folk dancing class that Hall joined and realised the beginnings of a play might be in the works.

Russian Immigrant Natasha begins a folk dancing class in the hopes to make money, and practice her English, with the goal of passing English exams to become a Music Teacher. She also cleans houses for a living. With her outsider’s eyes she is the perfect conduit for some pointed observations about the peculiarities of the kiwi culture that is Hall’s trademark. Where she comes from, singing and dancing is part of life. In New Zealand, she must pull together a rag tag collection of seniors who have other things on their minds.

Ned (Devenie), a widowed gentleman, becomes an initial figure of desire amongst the small but loyal following of dancers. Coral (Bronwyn Bradley), throws herself at him. Laura (Sylvia Rand) has the work done for her by best friend Janet (Downes), who wants to set her up so her and Laura can go on double dates with husbands.  Ned’s position however is threatened when a new alpha-male Sebastian from England dances (rather well too) onto the scene.

Alison Quigan, who also directs, (the Michael Hurst of Roger Hall?) and Cameron Rhodes, positively steal the play as comic husband-wife double act Bev and Ray, who tramp on wearing matching ‘save the kakapo’ t-shirts and proudly proclaim: “We’re retired”. Rhodes is a red-cheeked, hen-pecked clown, gifted with the best farce and physical comedy.

Watching the first half, revolving around the group getting to know each other and the attentions for Ned, I felt, more acutely than I’ve felt before, that I was the wrong demographic for the play, that it just wasn’t for me. I’ve enjoyed many of ATC’s Halls since my teens, but with Shortcut Hall particularly seems to be writing for his audience, who have aged along with him, and judging by audience reaction, still very much enjoy him. His Who Wants to be 100?, while dealing again with the senior set, had a broader appeal and moving themes.

I was able to settle into the second half, which focuses in further on Natasha and Ned. Ned takes Natasha under his wing, inviting her to live in his house and help with her English. There are more than faint echoes of Pygmalion’s Higgins and Doolittle here, which Hall himself nods to in the script. As custom with these things, there’s an attraction that we are aware of from the start, but only acknowledged by the characters much later on. What makes the Pygmalion relationship so fascinating is the conflict, but while Hall puts up plenty of roadblocks for the two characters coming together, including a late in the game worry about scam and a shoehorned unhappy family member, it feels largely too easy, conflict free, and therefore passionless. Crucially, we miss a real dramatic Pygmalion moment of the two characters breaking apart.

The dancing, taking in a mix of different European ethnic forms (as well as a memorable Western line dance), is a fun watch, and the cast rather good at it too (choreography Marija Stanisich). The back and forth moving set changes between dance studio and Ned’s home is a dance in itself (excellent design work John Parker) – watch out for the actors deliberately knocking something on the floor so they can duck down as the table and chairs they are sitting at disappears seamlessly into the wall.

A Shortcut to Happiness is perhaps most notable for being the last stated performance of Stuart Devenie, who is retiring from acting to focus on acting and teaching. As truly one of my most favourite actors (I think Disgrace is my favourite Devenie performance), I’m going to miss him. Just like we felt an absence when his character disappeared early in August: Osage County, Auckland’s stage will feel decidedly empty. So if nothing else, go to catch Stuart Devenie one last time!

A Shortcut to Happiness is presented by Auckland Theatre Company and plays at Sky City Theatre until 30 June before touring the North Island. More details see ATC. 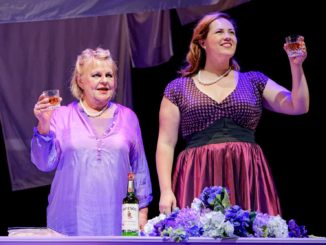 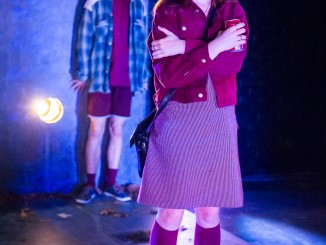 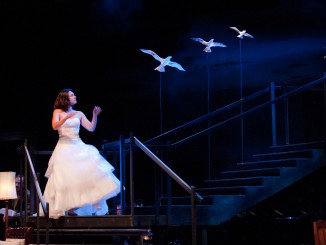