If this is a kid’s show, consider me a big one! [by James Wenley]

Outfit Theatre Company have turned their devising smarts on Lewis Carol’s Alice in Wonderland story. I’ve never been to one of Outfit’s School Holiday shows, so was very curious to see how their upstart (and often dark) style would translate for children.

As we enter TAPAC it sounds like some unruly kids haven’t yet learnt their audience etiquette. But wait, no, that’s the Outfit ensemble, decked in school uniforms, and acting anarchic on the thrust stage. With all the busy-ness in this preshow I don’t know what the kids watching made of it, but I enjoyed the bits I could make out. The show begins with a school class prologue (each kid corresponding to a different Wonderland character, ala Wizard of Oz) where poor Alice gets bullied (“Dreamer, dreamer, you like Justin Bieber!”). The meanest bully (Ema Barton) gets her gang to steal Alice’s cat Dinah, and says she is going to eat her for dinner. She meets a talking white rabbit, who leads her down a rabbit role, and Alice finds herself in a strange Wonderland….

Lewis Carol’s Alice in Wonderland, published in 1865, has been influential in many a generation of kid’s lives and been adapted many times (the Disney film VHS saw a lot of action in my day!).

Outfit’s Alice takes more of a cue from Tim Burton’s Alice in Wonderland, inserting, like that film, an overt heroes quest into the story structure, an essential choice here to keep the action moving and no longer than an hour (though with the amount of action they pack in, does seem longer). Alice must defeat the Evil Queen of Hearts by using her imagination to help her new Wonderland friends. Along the way she learns the value of friendship, teamwork, and standing up for yourself.

If that sounds too earnest, childish even, don’t fear – Outfit serve with their moral message with a good dollop of slapstick, meta-commentary, and fart jokes. They are not afraid to go dark either, after all, the major villain goes around calling for people’s heads to be chopped off, and they actively try to cater for both audiences. There are a fair few groaner gags thrown in (the sooner the world gets over the ‘my milkshake brings all the boys to the yard’ song, the better), but other humour is spot on for both age groups.

Edward Clendon makes use of his aerial skills as Caterpillar, perching himself upside down above the audience in his ‘cocoon’ – now I reckon that would have been amazingly cool as a kid to see.

The design work for this show is excellent. Costumes by Gayle Jackson are bright and magical. Brad Gledhil’s lighting and multimedia design is very clever; different environments and scapes are projected onto the stage floor. The ground spins when Alice falls down the Rabbit hole, or warps as Alice gets big and smaller in the room of many sizes sequence.

There are two great battle sequences within the show – an all out brawl between Queen of Hearts and our hero characters (keep your eyes moving and watch all the mini-battles unfold, I especially liked the March Hare’s choice of weapon), and then a dance/sing off where the Queen’s four cards (Jason Hodzelmans, James Roque, David Sutherland and Paul Lewis) channel the world’s current hot boy band.

In the end it’s happily ever after, and Alice is able to stand up to the bullies back at home with the help of her new friends (though seems to be very unconcerned about the fate of her cat, who has left with the bullies as they ran off… whoops!). And then there are lollipops for everyone, even the adults!

Outfit have taken all the greatest ‘hits’ of the Alice story and given it an exciting, charming and very funny spin. It’s great to see all the kids in the audience enjoying theatre, and yes, I enjoyed it immensely too! And I’m not just saying that because I got a lollipop. 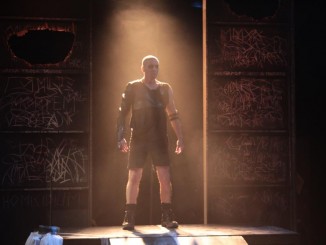