Developing third year solo pieces is becoming an increasingly viable option for recent drama school graduates. Such is the case with Toi Whakaari grads Phoebe Hurst and Emma Fenton’s double bill show Big Mouths, but where others have stretched their content into an hour-long full-length production or a feature film script, Hurst and Fenton have kept to their 20-minute circumscription.

Kicking off with Kung Faux: Call of The Siren, Hurst bursts onto stage in an instantly recognisable and programme-referenced Beastie Boys ‘Sabotage’ homage. As Mike Fordstaff, Hurst is an amalgamation of Ron Swanson, Ron Burgundy, and Heath Franklin’s Chopper, and doesn’t hesitate to deliver on their philosophical, metaphor-riffing one-liner styles. Hurst immediately engages the audience with some light banter, before delving into a simple yet well-structured narrative. A bare stage, a projection, and a few odd props are all that were needed for Hurst to take us on a journey – the rest came down to her larger than life physical comedy and surprisingly effective character changes.

Following a quick prop set-up which leaves the stage relatively vacant once more, Fenton enters and immediately establishes her titular character in Silke’s Big Day Out. Like Hurst, Fenton has a very specific style of comedy which she honours to the nth degree. More of an absurdist piece, Fenton uses very little dialogue in comparison to Hurst, relying more on comedic moments to be drawn out to lengths that would otherwise generate boredom if not for the precision of her facial expressions and restricted physicality. While less dialogue doesn’t necessarily equate to less story, the finale of Silke’s Big Day Out felt a like a bit of a deus ex machina.

UNITEC acting graduate Steven Chudley takes on the role of technical operator (technical requirements for both pieces aren’t exactly strenuous), and the un-credited Chris Parker (Toi Whakaari) assists in both pieces. It would have been interesting to have known about the guidelines that were behind creating these solo shows, if only to give a point of reference. A bare stage, a variety of basic props, humourous yet simple projections, captivating characters, and at only 40 minutes in total, I could have easily have invested in that amount of time for both Hurst and Fenton, as both actresses have created characters that could easily have lives in full-length shows.

Big Mouths AKA, Come to our show or we’ll punch you plays at The Basement Studio until 13 October. Details see The Basement. 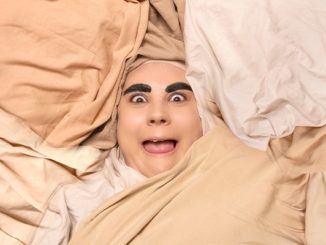 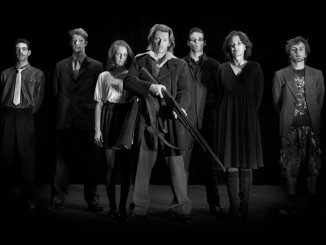