Physics, History, and the Atomic Bomb [by Rosabel Tan]

Sometimes a play will continue to work on you long after you’ve left the theatre. I don’t mean that the memory lingers, though this happens too, but that the experience continues to grow and transform, the seed of what was planted onstage blossoming over time.

A digression: Adaptation is one of my favourite films, but I hated it the first time I saw it. It irritated me, I didn’t understand the end, and what a fool I was. A week later I found myself still thinking about it, so I watched it again and realised that Kaufman was a genius and the film was a masterpiece. Copenhagen, for me, lies in the same realm.

German Physicist Werner Heisenberg (Simon Kane) is remembered for two things, or so he tells us: The uncertainty principle, and a brief visit he made to the home of his half-Jewish mentor Neils Bohr (Bruce Phillips) in Copenhagen in 1941. The nature of this argument remains a subject of controversy, and the play shows Heisenberg, Bohr and Bohr’s wife Margrethe (Jennifer Ward-Lealand) revisiting the event in a kind of afterlife where they try to figure out precisely what happened and why it led to the dissolution of Bohr and Heisenberg’s friendship.

As they work through the possibilities, methodically but passionately testing out various hypotheses for what might have motivated the events of the night, it becomes clear that the play itself – and any attempt to understand history – is an extension of Heisenberg’s own principle. In the same way that it’s impossible to assess with precision all the properties of a particle, so too can we never have complete knowledge of a historical event. This is where we find ourselves in Copenhagen:  occupying that liminal space where – as Adrian Finn defines it in Julian Barnes’ The Sense of an Ending – “the imperfections of memory meet the inadequacies of documentation.” It’s an uncertainty that lies at the heart of all matters, whether historical or scientific.

A confession: I didn’t enjoy the first act. I found the dialogue dense and too rapidly delivered, an overload of information that left me struggling to keep up. There was so little action onstage that it felt like it would be better served as a radio play – in fact, it helped to avert your eyes at times in order to fully concentrate on the dialogue. There’s a lot of anger, too, explosive and sustained for extended periods, all of which left me feeling physically distressed by the time intermission rolled round.

A realisation: This was wonderful.

Kane is especially exhausting to watch in the first act. He’s constantly moving or talking or engaging in agitated facial movements, not unlike a particle vibrating in increasing heat. His dialogue is delivered in such a way that it feels like there aren’t pauses where you know that there must be. Even silences are not silent, but filled with dialogue informing us of the fact. It’s an assault, not only of information but of energy, and one that feels expertly orchestrated by director Alex Bonham, for whom this play marks her New Zealand directorial debut.

The second act sees the characters relaxing, the interactions between them taking on greater gentleness and charm – and there’s nothing more charming than two academics talking excitedly about their work (this sounds like sarcasm but I’m being 100% sincere). Phillips is delightful, exemplifying the quintessential academic – the lovable kind – intelligent and witty and fatherly, too, and Ward-Leeland is a powerful presence as Margrethe. Composed and restrained, she forms the nucleus to the second act, the two men circling her like electrons and photons. This is made clear through the stage itself: designed by Rachael Walker, it’s comprised of a simple round dias, moated with grey carpet, evoking both the molecular structure of an atom and the anatomy of a mushroom cloud. Jammed underneath the stage are manila folders packed with papers and tied with string, occasionally interspersed with shoes falling into disrepair: a constant reminder of sources left unseen and, ultimately, unheard.

Beautifully intelligent, Copenhagen marks the debut production for Northern Lights Theatre, and what a debut it is: drawing out the poetry in physics and making it not only accessible but downright compelling, it’s the kind of play you can enjoy once but will want to see twice. 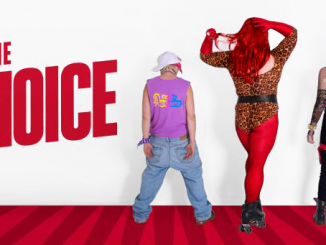