[A Trip Worth Taking]

Drug use and addiction are popular theatrical topics, but tend toward the extremes of experience. Daniel Tomlin’s play Dope presents a relatable and nuanced view, revolving around a family and their friends on the Shore in Mairangi Bay. It’s the first time smoking weed for the little brother (Miles Ford), following in the footsteps of his stoner older sister (Alice Pearce), with things complicated by their father (Steven Cyprian) being a cop and their mother (Kate Watson) being a nurse.

We follow the characters over the course of a day, the sister and her dealer (Bryce Kehoe) comparing the relative merits of Kronic, acid and weed over a shared bong. Her endearingly paranoid brother and more relaxed friends Dylan (Dylan Thuraisingham) and Lilli (Lilli Cornwell-Young) work out the logistics of sneaking out of the house to smoke – brother has a cunning ‘system’ involving the creaky back door and flushing toilets. Meanwhile, sister is on her first Tinder date (with Rhema Sutherland), which dives head first – to sister’s obvious discomfort – into North Korean drug laws, fake news, as well as their respective addictions. The Brother and his friends comically attempt to roll a joint in vain without a lighter. Luckily his ‘secret crush’ Hannah (Bridget Pyc) joins with a pipe, and much coughing ensures. Brother gets caught sneaking back into the house by his father, resulting in an initially police style interrogation turning into something more sensitive, a drug related version of the father/son scene in Call Me By Your Name.

The play makes a useful contribution to the broader discussion on drugs, particularly around weed, which is perceived by many as relatively low risk. The world invoked in Dope is a convincing portrait of an everyday scene in New Zealand, with an even handed portrayal of the motives behind and impacts of drug use and addiction. If anything, despite being a key theme of the work, the representation of addiction is understated – or maybe it just feels that way after being desensitised by the far more graphic and extreme experiences often portrayed in popular culture. The play lives up to its title with ‘Dope’ meaning both bad and good (referring to an illegal substance and as an expression of enthusiasm). It’s very even handedness and refusal to judge is actually quite a refreshing take on an often emotive topic.

A lot is packed into this play, perhaps too much, with superfluous digressions on nursing students not wanting to work with the elderly, and some slightly silted delivery of facts on weed (its effects and how to smoke it). On the whole though the dialogue is snappy and realistic, delivered well by a generally strong ensemble cast. Special mention must be made to the use of live music in the show, courtesy of Lane Twigden and Jake Love on drums, guitar and effects. They perfectly complemented this tale of addiction, with mellow, trippy and hypnotic grooves providing the perfect soundtrack. This is a very promising show, and with a bit of judicious editing focusing the on key themes and tightening the pace, it would definitely worthy of repeat run and broader audience.

Dope played at Te Pou 9-12 May as part of the Rangatahi Season. 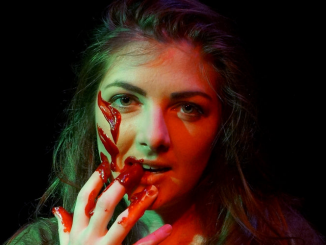 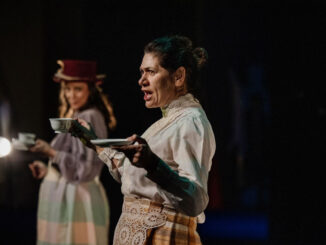