Catharsis of the Confessional [by Matt Baker]

3 women trapped in an elevator. It’s a simple yet possibility problematic premise, however, Jess Sayer’s script, as reflected in her writer’s notes, finds freedom within structure, and, consequentially, an incredibly engaging story.

Sayer’s razor sharp wit is acutely vocalised by not only herself, but also by fellow actresses Michele Hine and Lauren Gibson. The combination of Sayer’s vulnerability, Hine’s protective nature, and Gibson’s sardonic attitude makes for what, at first glance, may seem a tedious dynamic, but the sequences of constriction and release within the text allows for a great amount of variety for these actresses to play.

Director Cameron Rhodes finds a nice combination of tableaux, which the actresses gradually morph between without any hint of coercion, allowing for the physicality of the script to literally take shape (with moments of great back-acting from Gibson). The overall style of the play is slightly heightened, but only just enough to prevent enervation through naturalism. Palpable tension arises through not only the script, but also the potent pauses within it, resulting in a very well paced piece.

The set itself is simple, with blue tap marking the eponymous space. Andrew Potvin’s lighting design, operated by Pete Davison has its inevitable moment of flair, but otherwise remains dutifully discreet.

While the first reveal of the play is somewhat obvious, the second is much more left field, though fairly justified. However, it is the end of this play that truly shocks – a brave manoeuvre from such a young writer. Considering the pathos, humour, and brilliant snippets of double-layered dialogue within the script, and that this is only the second play she has written, I can only look forward to what Sayer has to offer as a writer, and an actress, in the future.

Elevator was presented by Junket Theatre and played as part of Auckland Fringe at The Basement Studio 20-23 Feb. 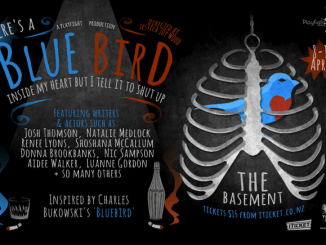 REVIEW: There’s A Bluebird In My Heart But I Tell It To Shut Up (A Playwright Production)