Rachael Walker’s seemingly simple set for Gwen in Purgatory belies the emerging complexity of interaction between a rich tapestry of family members doing their best [or worst] for their elderly mother or grandparent.

The show shines the spotlight on the tough and awkward issues that many of of us go through life avoiding. That’s the beauty of Gwen in Purgatory – as audience members we are forced to face all these terrible and trying issues head on. And the fact that there is no interval, during the 105-minute-production, creates an almost pressure-cooker-like ambience making it all the more confronting and effective as these messages are driven home with great precision and excellent acting.

The light-hearted start set the scene nicely and established the lead characters within her new ‘elderly-friendly’ house, coping with the loss of her beloved home and tennis court. Set in the living room, the actors however make full use of TAPAC, weaving through, between and behind the audience using the space to its optimum to represent the whole house.

It is a treat to watch iconic Shortland Street actress Elizabeth McRae (Gwen) strut her stuff on stage. Her experience is evident with her effortless and natural performance. Although a small part as son Laurie, Bruce Phillips is equally fabulous in the show. The little time he spends on stage is memorable and poignant. Another central character, grandson Daniel, played brilliantly by Ryan Richards is the butt of many jokes making him the perfect foil for Gwen and later in the show Father Ezekiel (Tawanda Manyimo). As the Nigerian priest Manymio endears himself and he shines particularly when he shares the stage alone with Richards. Their characters, which are poles, apart are a great source of hilarity. And last but definitely not least Michele Hine as Peg, Gwen’s daughter and Daniel’s ‘mother’, is great as the stoic daughter and ‘mother’ who struggles with life in general and who is taken for granted. But I have to admit that the two younger members of the cast Richards and Manyimo were stand outs for me. As well as more than holding their own, while sharing the stage with such seasoned actors, they kept in character beautifully even when out of the spotlight providing continuity throughout.

A little niggle however was the way the boxes that had been placed around the house were being shifted around the stage. When boxes are filled with glasses or bathroom stuff they’re usually heavy. However, when both Richards and Manyimo picked them up the boxes they seemed almost weightless, which was a little distracting. I also really loved the cordless phone, which seemed not to be.

The play is all about relationships and the competing demands, duties and desires of a family unit. While there was a lot of humour, it was the more poignant and recognisable moments that seemed to strike a chord with the audience. Issues such as loss of independence, greed and rejection abounded and interestingly so, with the inter-generational interactions with the family. Essentially the question of “what is the right thing to do?” came through the drama, humour and pain quite effectively.

I won’t deny that was a little worried when I was told that there wouldn’t be a break for more than 100-minutes but I thought the length of the play was perfect and didn’t warrant a break. However I would have liked to have seen more in the way of contrast, which might have kept some audience members from fidgeting in their seats. I hope that following the first night there could be more highs and lows that Tommy Murphy’s well-written script can and should deliver.

An enjoyable evening, with a talented cast and with a bit more tightening up this show can be more than a crowd pleaser, but a keenly observed comment on family, independence and love.

To be honest at the end, I wasn’t quite sure if Gwen really had been in purgatory or was the instrument of her own fate. Maybe it was because the writing was so real that some people may think that nothing much happens in this play. However, the characters and relationships are very well presented and clearly very recognisable, evident by the pin drop silence during certain segments of the show. Whether or not Gwen was in purgatory, this play has definitely made me think about my relationships with my own family and how I treat them and how I am inevitably going to be treated when I start to lose my faculties. So before you lose yours, go see the show…

Gwen in Purgatory is presented by Twist Productions and plays at TAPAC until 29 September. More information at TAPAC. 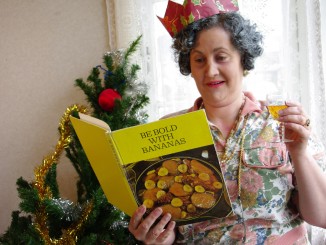 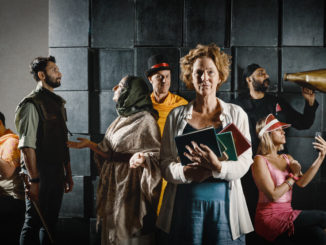