Opening on Broadway in 2005, Jersey Boys is beloved worldwide, having enjoyed record-breaking seasons on and off Broadway, successful global tours, and a nine year run on London’s West End, where it is set to return later this year with its entire original creative team. New Zealand company G&T Productions (formerly Amici Productions) has big shoes to fill in taking on a musical of this calibre, challenging the deep-seated belief that local New Zealand productions are somehow inherently sub-par. Opening night of the Wellington season crushes any opportunity for doubt, as the cast and crew of Jersey Boys deliver an absolute knockout of a show which feels more like an enormous celebration than simply a performance.

At the heart of Jersey Boys is the story and music of four men – Frankie Valli (Hayden Milanés), Tommy DeVito (Fergus Inder), Bob Gaudio (Matt Cranleigh) and Nick Massi (Andrew Coshan) – and this cast delivers everything an audience could ask for. New York-based Milanés’ experience and skill in the Frankie Valli role is a treat to experience first-hand. His nuance, charisma, and vocals are nothing short of brilliant, and Milanés is so finely skilled and in control that even within a production as tight and slick as Jersey Boys he finds space to personally connect with the audience and deliver a performance that feels genuine, responsive and fresh. Inder, Cranleigh and Coshan, each embodying their roles with depth and care, make up the quartet of Jersey Boys powering through this hugely demanding show with stamina and real joy. Opening night adrenaline may have been responsible for some of the comic timing in the initial scenes being slightly too rushed for all the jokes to land, however, following the appearance of Cassandra McCowan as Mary Delgado with her smooth delivery and perfect timing, the entire cast gave the script just the right amount of space to breathe. Among a strong ensemble, Andrew Grainger (as Gyp De Carlo), Russell Dixon (as Bob Crewe) and Lewis Francis (as Barry Belsen/Others) are especially entertaining.

Wellington’s Opera House is an infamously difficult venue for staging large theatrical productions; the limiting sight-lines restrict viewer access to the full scope of the stage. Harold Moot’s simple, industrial set design, with clever use of large LED walls continually transforming each scene, does a great job of stimulating visual interest for every seat in the house. Choreography by Destiny Anderson is authentic and energised, with only a slight lack of synchronicity and unison during the “live television broadcast” scenes. Jersey Boys is a fast paced show, with scenes as short as thirty seconds appearing as succinct vignettes, before transitioning seamlessly on to the next. These super slick scenic jumps are executed flawlessly and with precision by every member in the production. The clever lighting design by Jeremy Fern and AV design by Dave Spark marry perfectly together and allow the narrative to play out with energy and nuance.

Jersey Boys is a delightful celebration of the music of the Four Seasons – the greatest strength of the production is the huge slew of hit songs including Sherry, Walk Like a Man, Bye Bye Baby, Big Girls Don’t Cry, Working My Way Back to You, Oh, What a Night and (of course) Can’t Take My Eyes Off You. The reach of the Four Season’s music is evident in the huge number of instantly-recognisable (even for younger audience members) hits from amongst the thirty-five tunes on offer. The Jersey Boys Band, conducted upstage behind the set by Music Director Zac Johns, is neat and punchy, with musicians (drums and horns) making welcome appearances onstage to add diegetic instrumentation to some of the bigger numbers.

Jersey Boys is a crisp, professional show and an enjoyable romp through the poignant story of Frankie Valli and the Four Seasons. By the final number, the audience are on their feet cheering, with many dancing and singing along in the aisles. The G&T team have created a feel-good night at the theatre if ever there was one, and their production of Jersey Boys would be aptly described as unmissable.

Note: A warning that a disreputable ticket resale website “sold” unavailable seats to the opening night performance of Jersey Boys leaving some people without legitimate tickets. They appear to be attempting to do so throughout the Wellington season. Official tickets should be booked directly with Ticketmaster. 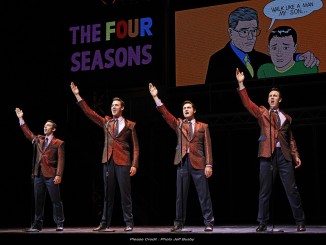 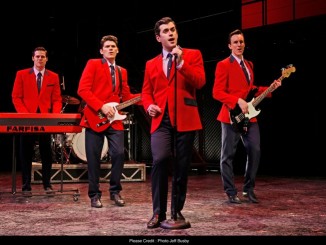