If you want to crack the Auckland market, sex and cirque sells. Already we’ve had the Spiegeltent adult-circus double-hit of Empire at Wynyard Quarter and Limbo for Auckland Festival. Le Noir comes from the bankable team behind The Illusionists phenomenon.

If you are someone who knows their Cirques, you’ve probably seen most of these acts before here in recent years. Fact is, we’ve been rather spoiled. Strong men, contortionists, the roller shaking duet, even the ‘Columbian Wheel of Death’. So it becomes how you dress these acts up. Or down, in the case of Le Noir. Unfortunately the creative team have gone for the bare minimum in more than just the costuming.

The thrust stage of a Spiegeltent is recreated and elongated on The Civic stage, and you can even nab yourself ringside seats if you want to get closer to the action (or become the action, as the case may be). From the stalls though it all looks a bit drab, not at all helped by the haphazardly draped black cloth around the thrust stage’s perimeter. I’m not encouraged when the mad-hatter Master of Ceremonies, Salvador Salangsang, makes multiple entrances to demand more and more applause each time. Yes, pump up the audience by all means, but you’ve got to earn my acclaim.

While it promises the “Dark Side of Cirque”, Le Noir is very tame. This is circus via Victoria’s Secrets. We’ve got skimpy costumes and gratuitous dances to cover transitions, but darkness? Nope. I bet these performers do have intense stories about the real dark side of circus, but we’re not going to be let into those secrets tonight. There’s a colour-coded aesthetic, sure, but I don’t get much of a sense of a creative vision behind it all. It’s a marketing exercise, not an artistic statement.

The good news is the acts and performers give bang for buck. They move through the set-pieces at rapid pace, never over-milking like other shows in the genre are often guilty of. There’s a lot stunning aerial work, on a lira, trapeze, and straps, with the performers hovering with skilled precariousness over The Civic stage. Jonatan Carp and Yuliya Suslova are particularly impressive on the Duo strap, with Suslova hanging by her partner’s neck, and leg, and torso, and thighs. Strong men Valeri Tsvetkov and Yani Kostov mould together in their lifts, becoming a beast with a head on either side of their body. Skaters and real-life couple Jeronimo Medina and Jessica Ritchie play out a relationship of give, take, and absolute trust, spinning on a tiny stage. The sensitive Pas De Duex by Valerie Charbonneau and Mason Ames is the most sensual act in the line-up. Geddy Pavlovicious’s great trick on the Rolla Bolla is moving from one stack of moving cylinders to another. We’ve also got shape spinning, single hand balance and a Cyr Wheel – excellent variety.

The big guns are of course saved for the end of both Acts, where the action moves to the front of the stalls in the orchestra space. In the Aerial Cradle, Anny Lapante is thrown and caught by Andrei Kelesnikau. With two large spikes on the contraption, there isn’t much room for error. Kelesnikau gains such velocity that you worry she might be catapulted into the Civic’s night sky and never seen again. That’s also where the ‘Wheel of Death’ has been hanging like the sword of Damocles over the audience’s heads. Angelo Rodriguez and Carlos Macias are the dare-devils of the night. It looks dangerous enough when they are each inside a wheel, and dangerous still when one of them starts walking outside of them, so the fear factor (for the audience at least) is off the charts when they’re both outside doing it – racing to get over as their side rapidly tilts down.

Le Noir may not give us what it says on the box, and if you are a circus regular there are parts of the show that you will likely find rather underwhelming. However, the artists are super, and super-human in their abilities, and definitely deliver on the thrills. I just think the Auckland audience is more sophisticated than what this show gives us credit for.

Le Noir is presented by Tim Lawson and Simon Painter and plays at The Civic until 8 November. Details see Auckland Live. 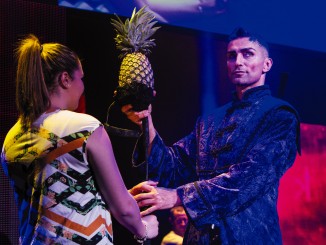 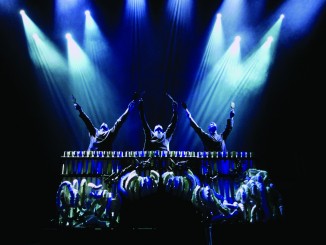 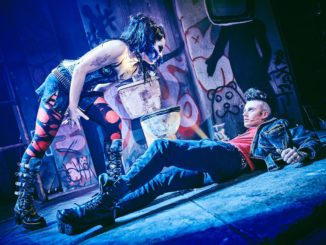