The reimagining of Shakespeare’s classic poem, The Rape of Lucrece by William Shakespeare, marks the first professional production by the Auckland Shakespeare Company. By bringing dramatic visibility to the poem they demonstrate just how long rape culture has festered throughout history, another story from the extensive canon of abuse fueled by male entitlement. Shakespeare’s text is 422 years old, and the story is set in Rome nearly 1000 years prior. Whilst the position of women in society has changed drastically over the years, even today, in our supposedly enlightened and equal society, Lucrece’s story rings true to modern audiences. If the audience on opening night was a cross section of society, then one third of people would have suffered some sort of sexual abuse prior to the show. Considering how triggering this material can be, putting on a play about rape is a risky venture, however the company handles the content with respect and care.

Director Rita Stone has crafted a visually stunning show that flirts with different conventions including chorus, song and acrobatics. The music, composed by Paul McLaney, complements the text terrifically both in rhythm and style. The singing is at its most powerful as an ensemble but is lacking in solo pieces. Whilst the cast all have musical talent the lack of training becomes apparent in these moments. The use of a male Chorus is justified as the play develops, however, their presence feels forced in places, as a rule Chorus need to be purposefully utilised otherwise they become redundant and distracting. The Chorus’s eerie masks and use of inhuman movements felt tired and clichéd, though the actors timing and energy go some way to redeem the lack of originality.

The four lead actors, all exceptionally talented, carry the text with clear understanding and passion for the project. The division of the text between the four actors is cleverly done, and whilst it takes a little while to get used to, ultimately it proves to be engaging and consuming. The poetry creates a distance between the events and allows for the objective eye, which is unusual in theatre. This objectivity gives voices to all involved, from victim to perpetrator, to bystander, and to the audience.

The two supporting actors, Daniel Watterson as Lucrece’s husband Collatine, and Sheena Irving as her maid Lucia, particularly dig deep into the text. Watterson is outstanding in his delivery; he takes every line and carefully unfolds it for his audience to devour. Irving captivates and reels in her audience in with every thought-out line. Despite carrying heavily expositional dialogue both actors make the audience feel a desperate empathy for the futility of their positions. Placing Collatine and Lucia up high on hanging ropes cemented their roles as narrators outside of the action, able to see all, but ultimately helpless to intervene. This acrobatic element was a pleasant surprise, and evidently the use was thought through conceptually as well as visually, but it would have been nice to see the ropes utilised further.

The lead up to, and the act itself, are treated tastefully by both Calum Gittins as Tarquin and Anthea Hill as Lucrece. The focus then shifts to the aftermath of the incident. Here the performance begins to join the modern-day conversation of rape culture. Tarquin flees the city, leaving Lucrece to bear the heavy weight of her besmirched shame and deal with the consequences. Often rape in literature and film is used merely as a device to prove the evilness of a character, or to heighten the stakes, and the victim’s story is lost as a throwaway plot line. Lucrece acknowledges the devastation abuse can bring. In addition, Lucrece is strong willed and steadfast in her objective to bring forth her abuser for punishment. So often, victims of abuse feel they cannot step forward in this world of men and claim their right to justice, placing Lucrece on stage is a reminder that these voices deserve to be heard.

Lucrece is a strong performance with a solid team behind it that ultimately leaves us with an important message. In a season where Silo Theatre explored rape culture with Melissa Bubnic’s Boys Will Be Boys it’s encouraging to see other companies also take on the responsibility of handling such sensitive concepts and issues instead of resting on easy entertainment. Hopefully this encourages more people to use theatre as a social and political tool to create and sustain important conversations.

Lucrece is presented by Auckland Shakespeare Company and plays at TAPAC until 30 Oct. Details see TAPAC. 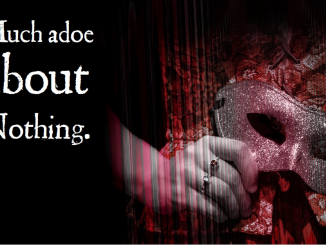 REVIEW: Much Adoe About Nothing (Young Auckland Shakespeare Company) 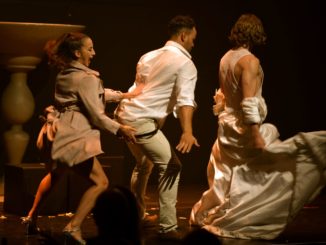