[The Absurd Coexistance of Extravagence and Necessity]

Lunar State brings Calvino’s moon-milk concept to life through a series of abstract ensemble vignettes. The narrative follows a young girl who collects precious milk from the moon and distributes it among her people. However, this symbiotic relationship between moon and person is disrupted when the rest of the world discovers the moon-milk.

Lunar State is a perfect balance between abstraction and narration, translating the narrative into dance or haunting song where necessary. It is often too easy to lose a narrative in surrealism, but Lunar State never crosses this line. The different modes of performance are all necessary to convey a particular emotion or a particular moment in time. These shifts in performative mode are a clever way to implicitly show (rather than tell) an audience what is going on.

The choreography of Lunar State is beyond what I expected: each movement is performed with a planetary gracefulness in mind, as though really in space. This celestial choreography is heightened by amazing set design and lighting, creating the illusion of an endless stage; we stare into an infinite abyss, the actors dancing on nothingness. Each prop or piece of set design is carefully constructed to give the movement and texture of planets in space. I forget we are in a theatre – the experience that I live for when watching performance.

The cast do a fantastic job of encompassing different modes of performance and changing characters in seconds, moving from graceful dance to absurd humour. I also love the fact no translation is provided for the te reo sections of dialogue, which forces a confrontation with our own greed and extravagance in Aotearoa.

Some of the humour initially feels forced, out of place with the spiritual largeness of the rest of the performance. But as the performance goes on, I realise the cleverness of having this humour coexisting with sadness all at once. Lunar State really captures the juxtaposition of the absurd and the sacred, of extravagance and necessity. The awkward humour is interspersed with scenes of greed, making me feel unsettled. Perhaps this is exactly what is wanted. When people start to obsess over the moon-milk, creating television advertisements and cooking shows to promote it, I feel as though I am watching myself from a third-person perspective. Lunar State hones in on the absurdity of consumer culture, leaving nothing sacred, hypersexualizing everything from food to young celebrities. And we all get swept up in it, fighting over new ways to keep ourselves young or relishing in celebrity humiliations.

Using surrealism and humour in a subtle way to unnerve its audiences, Lunar State does not throw questions in your face or confront you directly. Instead, this performance is  as quiet as outer space, using silence and moments of nothingness to force introspection.  Lunar State uses the setting of space to create a microcosm and macrocosm, zooming in and out where necessary. These moments are particularly effective as they really represent  how large we think we are on earth, and how small we actually are in the expanse of space.

When I left, I did not expect to be thinking about this play for the rest of the night. It crept into my thoughts, particularly when I was in the supermarket watching the mass panic spread through each shopper. We are confused about what is necessary and what is extravagant.

Lunar State is a short, modest performance –  less than an hour, but it says everything it needs to say. It is to the point, but not dogmatic. It is sentimental, but not saccharine. Lunar State is a perfectly balanced performance that translates a surrealist concept into relevant contemporary ideas. 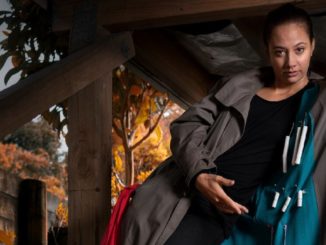 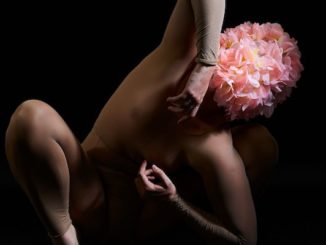