Directed by Tom Mallaburn, the Pop-up Globe’s production of Macbeth is mostly a traditional take on the material. I say mostly, because the show’s creators make one interesting addition right at the top which causes ripples throughout the rest of the show. There has always been a theory that the Macbeth’s had lost a child [Lady Macbeth says in the text “I have given suck, and know how tender ’tis to love the babe that milks me”] – this production opens with a sequence showing the child’s murder by (spoilers!) Duncan’s men.

It is left a bit vague, but my reading of this scene was that Duncan suspected Macbeth of being a part of Macdonwald’s rebellion, so he had Lady Macbeth’s baby killed. In a neat touch, this sequence repurposes the dialogue from Lady Macduff’s death scene. It sounds a little cheesy, but this scene wound up being a significant addition that turns the Macbeths’ eventual downfall into a tragic echo of the man they usurped.

At first, this felt like an unnecessary justification for killing the king, but it ends up adding another dimension to the play’s thesis on the nature of evil. Even a supposedly ‘good’ man like Duncan has a dagger in his smile. It adds an interesting undercurrent of hypocrisy to Duncan’s later embrace of Macbeth. The implication is clear – despite the supposed aberration of Macbeth’s rise and exercise of power, he is not an outlier. The crown will corrupt and destroy whoever becomes its master. “Blood will have blood”, as Macduff says.

Of course, tyrants can only exist when people are willing to support them, and in another echo of Roman Polanski’s movie adaptation, this production turns Ross, a court lackey who eventually joins the forces against Macbeth, into a willing participant in Macbeth’s murders. Unlike the Polanski version, where the character came across as an amoral pragmatist, Nigel Langley’s Ross is a weak-willed soldier who is terrified of ending up on Macbeth’s enemies list. His eventual turn only comes when Macbeth’s hold on power becomes less secure. In this respect, he might be the most banal yet believable representation of evil in the play. He will do anything that ensures his own survival.

Paul MacLaney’s musical choices (particularly the use of wind chimes) is understated and creepy. It is a key component in one of the show’s real triumphs: the witches. Singing their lines, crawling and dancing about the stage, the witches (Romy Hopper, Julia Guthrie and Jess Holly-Bates) end up being surprisingly effective.

As far as the performances go, the highlight is Greg Johnson in the roles of King Duncan, the Doctor who attends Lady Macbeth, and the drunken Porter; he gets to have fun and interact with the audience while everyone else is carrying the show’s dramatic weight. His performance as Duncan – specifically in light of the opening scene – is particularly good. He is charming and amiable, the complete contrast to his initial actions and the dour Macbeth (Stephen Lovatt).

Amanda Billing was good as Lady Macbeth. Though the lines are familiar, there was a vitality and a desperation to the way she pushes her husband into killing Duncan that worked. Her Lady Macbeth did not feel like a femme fatale as played in some versions, but a woman who sees an opportunity to take charge of her life.

Speaking of making a familiar role fresh, Jason Will is really good as Banquo – he gives Macbeth’s friend a charm and sense of fun that makes his eventual demise all the more tragic. Matu Ngaropo is also great as Macduff. While Macduff is a role with a lot of pathos, the most interesting aspect of his portrayal – particularly when he learns about his family’s fate – was silence. You could actually track the way the news hits the nobleman, with Ngaropo emphasising Macduff’s shock as he tries to process the tragedy that has befallen him.

In the title role, Stephen Lovatt folds into the ensemble in the early part of the show. Lovatt cannot help but be an everyman. Initially, I found his performance a little out-of-place. Maybe it is the effect of Macbeth’s role in the early part of the story, but there was something about his delivery that was not connecting. Once Duncan is dead and Macbeth begins his decline into paranoid tyrant, Lovatt’s choices began to connect. He ends up being rather affecting, particularly in the pivotal dinner scene when he sees Banquo’s apparition at the table.

Overall, the Pop-up Globe’s production of Macbeth is an intriguing take on the text that would make for a good introduction to newbies looking to experience the Bard in a space vaguely approximating its original context.

Macbeth plays at the Pop-up Globe till April. 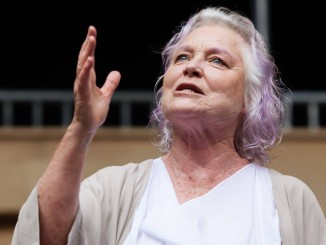 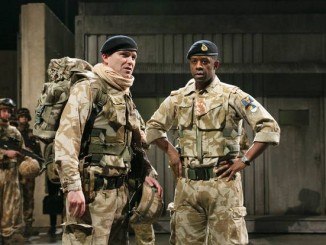