With the prospect of NZ Trio, composer Chris O’Connor, graphic artists Cut Collective and playwright Gary Henderson collaborating with Director Sam Scott and her cast on a new Massive Company show, the last thing I expected to come away from My Bed, My Universe was a feeling of underwhelming flatness.

Its starts beautifully – the 6 member cast tossing and turning on wooden boxes as beds, the music of NZ Trio swelling as lights breaks like the day through the concert chamber. The cast have been awakened – a miracle – and they share that feeling of first consciousness. They share with us their rooms, their beds, talk of angling their beds just right to catch the morning light (and action this too – pushing those boxes around till they find their special spot). Now they are into their morning routines, and suddenly there’s a gaggle of joggers zooming round the stage. It’s classic Massive, the ensemble building a world together.

It’s the level of the physical and aural that the show feels most alive, bursts of expression from the performers – leaps and rolls, but also clicks and body percussion – matched by the urgent energy of the piano trio, all onstage feeling and feeding each other’s vibe.

But for a show that wants to take us to the universe and back, it barely makes it past its own backyard. A gesture of rapid beating of hand on chest transforms into a (admittedly frustratingly  catchy) song about how “if you’re from the North Shore you’ve got a really bad rep – sure thing – shore girl”. The Go Girls stereotype was old even when even I first heard it in the playground, and though we catch that air of familiarity, it’s a stale familiarity. So too the jumble of stereotypes that the company seek to subvert by listing and mashing them; they are going over old territory. Like the list of New Zealand place names they trot out to evoke our sense of belonging in this country, there’s nothing new added to the conversation.

Though the material is based on interviews and person stories, it’s as if they are a band of storytellers without a story to tell. Just a lot of lists. In one sequence they go from one extreme –  listing things they hate (like people who lie or how we never learn), with distorted overblown demonic vocals –  to the other, listing things they love (a beautiful strain of “I love coming home” becomes the main motif) without filling in the grey areas. They present empty subject positions without nuance or connection.

There’s opportunity for maturity when the ensemble discuss having children, but even this remarkable life stage is given a too easy once-over. The direction overly sign-posts when they are about to present sad material about loss, the lights dutifully dipping to melancholy blue, and what is designed to be a poignant moment about the grief of losing a loved one becomes a moment I am utterly alienated from.

The one sequence I found absolutely compelling was a story told by Dominic Ona-Ariki that started small – about a guy cussing the teller’s mum – that escalates unexpectedly into a violent and powerful message of regret. It was a moment that felt the most full and complete in of itself, and one that I couldn’t perceive of where it was travelling from the outset.

Cut Collective’s vibrant animations appear on a beautiful stretch of pockmarked canvas at the back of the stage, depicting people and the symbols that are important to them as a map of constellations. The graphics placement as book-enders to sequences however make them feel more like an afterthought than an essential part of the whole package.

A feedback postcard states, borderline apologetically, that “The show has many moments. Some are stories. Some are not. As you watch and listen, let yourself travel your own journey. Whatever you feel is right”. And for that last point, that’s as it should be. In assessing these stated intentions, the flaw for me was that I didn’t feel invited to travel my own journey. In a premise that invites the abstract, the music of the spheres, the non-lineal, My Bed, My Universe has got stuck in the literal.  Though it seems to want us to fill ourselves into the work, we aren’t given the gaps to do so.

It doesn’t travel beyond their first bed. What of other metaphorical beds, beds on the stages of life’s journey? The shared bed? The marriage bed? The sick bed? The death bed? As for the universe, it’s a very small and contained one indeed.

Unfortunately, the top collaboration in My Bed, My Universe fails to spark. For a show that wants to be about everything, it ends up being about nothing.

My Bed, My Universe is presented by Massive Company and plays at the Town Hall Concert Chamber until 5 April then Mangere Arts Centre 9-12 April. Details see Mybedmyuniverse.co.nz 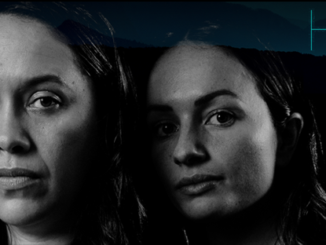 REVIEW: Half of the Sky (Massive Company) 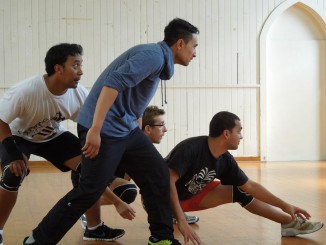 1 Comment on REVIEW: My Bed, My Universe (Massive Company)