[Treading the Imprints of Cultural Traditions]

As the light slowly fades up to the sound of ocean waves breaking, a line of Chinese calligraphy is revealed stretching across the scrim that forms the backdrop to the stage. The bleeding line of ink might represent a jagged mountain range, but perhaps also a fracture or rip in the identity of the woman (Nikita Tu-Bryant), who steps onto the stage a moment later. The woman is preparing for a journey, carrying a suitcase and wearing a Chinese jacket but mismatched shoes. As she opens and checks her passport, the stage is flooded with the sounds of gongs and drums reminiscent of Chinese music, reinforcing the sense of cultural dislocation that forms one of the narrative threads underscoring this production. A moment later two ethereal and other-worldly characters enter the stage with a slow stylised walk. Performed by Chye-Ling Huang and Marianne Infante, the spectres are dressed in white flowing robes with pointed hoods that resemble traditional Chinese funeral attire. The pair flow like into the space unsettling the woman who is preparing for her journey and introducing a main motif that recurs throughout the performance. Throughout the performance, we see a woman wrestling to locate herself within the push and pull of Chinese cultural traditions – tides that at times threaten to drown her.

Premiering in Wellington at BATS Theatre in December 2018, Tide Waits For No Man: Episode Grace has returned ‘home’ as part of the Auckland Fringe Festival. The play offers a series of meditations on Chinese patriarchal gender constructions in a physical and non-verbal performance that incorporates shadow, puppetry and movement. This performance is part of a wave of Chinese Kiwi theatre sweeping Auckland stages over the last few years generated in part by the impressive talents behind Proudly Asian Theatre (PAT), a company dedicated to producing, empowering and enabling theatre and film by Asian talent in New Zealand. Co-founded by Chye-Ling Huang and James Roque, PAT have held regular playreadings and staged five productions since being formed in 2013, including the recent productions Roots by Oliver Chong (2018) and Orientation (2018) written and directed by Huang. PAT’s location in Auckland makes sense, as the city is being increasingly transformed by Asian immigration, with Statistics New Zealand suggesting that 34% of Auckland residents will identify as Asian by 2021. This cultural reality might appear to be underrepresented by our flagship cultural institutions. As a proactive corrective, PAT joins other innovative Chinese Kiwi theatre-makers who are responding to the changing cultural landscape of our largest city such as Renee Liang and Alice Canton, as well as outfits I-Start Chinese Theatre and Felix Creative Theatre who produce work mainly in Mandarin. Through a growing body of intelligent work, PAT is challenging Asian and Chinese stereotypes and interrogating racial politics and identity in New Zealand. They are also showcasing the talents of a burgeoning generation of actors and providing substantive opportunities for culturally diverse performers.

The premise for Nikita Tu-Bryant’s  show is that a young woman, Grace, is forced to engage with aspects of her cultural roots after the death of her Ye-Ye or grandfather. But this engagement is not just about the grieving process, it is also about how a second generation Chinese-Kiwi negotiates patriarchal constructions that are part of her grandfather’s legacy. This legacy is represented using clever backlighting (Lighting design by Nic Cave-Lynch) in which several Chinese Hanzi characters appear as cut-out shapes casting shadows on the backdrop and signalling the titles to a series of episodes that structures the work. The first, ‘Clean Woman’, involves a sequence of object-puppetry, where the young woman’s discarded shoes are brought to life, manipulated skilfully by Huang to dance across the stage. The sequence introduces Chinese calligraphy as an artwork that connects Grace to her grandfather, with Grace using a large brush to ‘paint’ the backdrop cleverly created with the use of shadow puppetry. The sequence ends when a beautiful puppet of the Grandfather’s spirit entering the stage to confront Grace before leaving behind a red umbrella that becomes an recurring symbol in the show. Created out of long sections of muslin with the folds in the material resembling the wrinkles of a wizened face, the puppet (maker unattributed in the program) is wonderfully constructed and provoked sighs of delight from the audience as it entered and left the stage. The second episode, titled  ‘Silent Woman’, sees the two spectral figures, performed with elegance and strength by Huang and Infante, entering the space to haunt Grace and resulting in a choreographed sequence of stuttering movements. The final episode ‘Calm Woman’ sees Grace caught in a struggle with her Grandfather’s spirit.

A beautiful and meditative piece of work, the cast compellingly compose and perform a series of striking images to tell Grace’s story.  However, the production’s attempt to use the language of physicality, puppetry and movement instead of words to privilege accessibility was slightly undermined by the staging in the Basement space. The narrow but fairly long seating configuration obscured some of the action and the puppetry happening on the floor at either side of the stage. And while the images were captivating, some audiences might search for a little more narrative clarity.

We have come a long way since Lynda Chanwai-Earle’s Ka Shue (Letters Home), hailed in 1996 as the first Chinese/New Zealand play written by a New Zealand playwright of mixed-Chinese decent. Deploying a conventional western play format but infused with Chinese stylistic elements and magical realism, Ka Shue challenged stereotypes of the ‘oriental’ women. Twenty-three years later, Nikita Tu-Bryant is also challenging stereotypes but in very different ways. This confident production elides the primacy of logocentrism and the written word. Instead of words we have images, and instead of challenging white orientalist notions of Chinese femininity, we have a production that interrogates traditional Chinese gender constructions stemming from Tu-Bryant’s own Taiwanese heritage. Instead of focusing on white inscriptions of ‘the other’, the production uses the metaphor of Chinese calligraphy to  interrogate the imprints of cultural traditions and the processes of cultural transmissions that continue to mark subsequent generations.

Tide Waits For No Man: Episode Grace is exciting theatre, pushing the boundaries and redefining what Asian, and Aotearoa New Zealand theatre, can be.

Tide Waits for No Man plays Basement Theatre until 23 February. 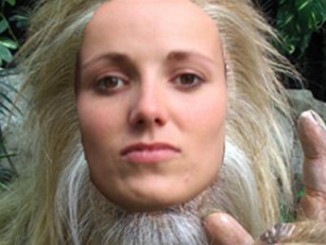 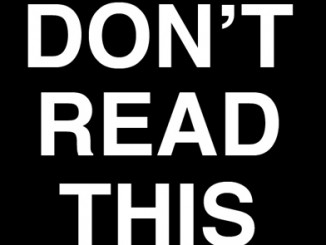 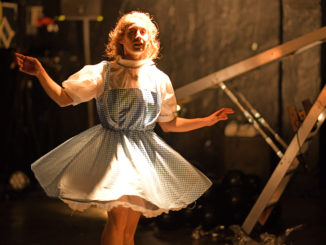