[Reaching Across the Divides of Time]

I walk into the familiar environs of Basement Theatre’s larger space feeling particularly absent-minded, and am pleasantly ushered through a series of recurring paper streamers into a black-box space designed to transport us to a new world while leaving all cares of ours at the door. The set (designed by Christine Urquhart and constructed by Catherine Ellis) is installed in a corner to my left in a 90-degree view to the audience, with a large metal saucepan steaming away atop an electric stove. Familiar tunes wash over me as I walked over to the seating area directly opposite, although it took me a while to figure out that the origin was a live band located at the other corners of this cuboid space. Apart from the saucepan and a toaster oven on top of two-level risers, the set appears austere, but it is the live band who set the tone for a mysterious performance.

A young Pākehā man dressed in casual dress (jeans and a crumpled white shirt) skips through the paper streamers lining the edge of the performance space. This is Violent Bloom’s writer and performer Andrew Gunn, perhaps best known for Potato Stamp Megalomaniac. He peers at the audience,  climbs the two steps to the highest level on the risers, and begins to sing. I am captivated by the Scottish folk tune, ramping up the palpable sense of mystery about this man. He is handed two bloody pieces of meat from an unseen aide above him, and I marvel at how handy it must be to have height as an advantage while performing. Gunn holds these two pieces of meat about a foot apart in his hands, locking gazes with the audience and inviting us to join him on a journey of yearning for a clearer understanding of his identity.

A well-worn suitcase is handed to him next as our protagonist speaks with a recording of his grandmother about his roots (emulating a phone conversation on speakerphone). The meat has been placed inside a saucepan of boiling water, and we are treated to the time-tested conversation about the older generation’s colourful interactions with the motions of finding and opening files on desktops that only appear on screens and are otherwise invisible. A kilt emerges from the suitcase which is donned after Gunn shrugs off the jeans, a clear indication of moving from one time to another. An eighteenth-century fencing sabre is retrieved by the protagonist and several thrust and parry moves are trialed as a sort of symbolic backward time-travel, reminding me of Outlander. The pace speeds up, and we quickly switch from song to monologue to song. This series of quick changes throughout the performance, interspersed with dialogue with Gunn’s grandmother and other voices, traces the fitful and personally meaningful journey of discovering critical events in the lives of the protagonist’s ancestors, guided by the direction of Tawanda Manyimo.

Gunn scrambles through an oral history narrated by his grandmother, touching upon generations remembered by individuals still alive. He also reaches back further across time to the age of the Jacobite uprising in Bonnie Prince Charlie’s time – a conflict that divided most Scots into unionists and rebels. Another key moment is the migration of his grandfather to Australia and the meeting between his grandparents. The raw depiction of poverty and anti-Scottish sentiment unravels through a poetic monologue delivery, startling us with Gunn’s refusal to shy away from the realities of grief and loss.

Particularly puzzling in the Violent Bloom experience is the use of subtitles projected onto the paper streamers. Sometimes they appear when Marcus Mac An Tuairneir’s Scots Gaelic translations are used in song. On other occasions, a contrasting Scottish-accented English is used onstage as a medium of delivering poetry while the transcription appears behind the solo actor. If written words were meant to render things as clear as possible, Gunn’s occasional improvisation of the English components of the script results in the opposite effect. I struggled to divide my attention between the actor’s soulful rendition of how he reached out to connect with the life experiences of the generations that preceded him, and the words projected behind him. The subtitles work best when they deliver the wittiest elements of the script, such as telling us why a particular comic relief occurs at the mid-point.

The connection between us and the protagonist is emotionally most potent when he looks into each of our eyes in turn, all the while delivering impassioned calls to imagine the strife of emigrating Scots through entreating monologues. The smell of boiling meat in the saucepan adds to the feeling of being in a different time, although I was mystified as to the purpose of repeatedly bringing it to ground level from its default position atop the electric stove. The presence of the live band with Tom Dennison, Laszlo Reynolds and Leith Towers elevates the communion with every member of the audience. The strong central theme of colonisation correctly warranting the allocation of culpability for the destruction and humiliation of so many peoples is especially revealing in the latter two-thirds of the show. Having said that, the narrative is punctuated by a series of awkward staccato transitions that are a little abrupt, detracting from the audience’s perception of the performance.

If I had to pick, it would be the blurring of lines between Scots Gaelic and English during the songs that deftly blends together the harrowing experience of sifting through the journeys and struggles undertaken by those who raise us which makes for a spellbinding show. Add to this a mesmerising sensory feast of song, monologue and conversation with unseen characters, and the audience feels like the show is something special. Wherever awkward transitions occur, they do not diminish the spectacle for the spellbound audience. Some, like the appearance of a bottle containing a whiskey-like liquid, and the lapsing of a full minute’s distraction before the protagonist grabs it, are fleeting pauses without meaning, and we quickly surrender ourselves to the hypnotic performance once again.

The strength of the script lies in its execution, and the ability of Gunn to create an illusion where reaching across the divides of time feels organic to an audience. When viewed from this lens, the production succeeds in sustaining our attention by engaging our minds with curiosity and mystifying suspense and releasing that tension through an emotionally-charged and multi-sensory trek through the pain wrought on humanity by a colonial legacy that continues to haunt all of us in our communities.

Violent Bloom is presented by Pressure Point Collective and plays at Basement Theatre until 3 November. 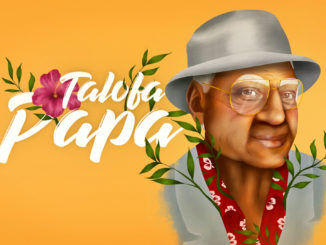