[Nobody puts Cake Baby in the corner: fatness, art, and representation]

The Basement stage floor is littered, quite literally, with trash – empty take-out boxes, wrappers, and containers of food – directly contrasted by diaphanous pink material strung grandly from the centre of the ceiling. It is immediately intriguing and the audience seems to be in a good mood, warmed up by the 2000’s and Lizzo bangers in the pre-show mix. These tracks give way to a soundscape of chewing as Alice Kirker takes the stage.

Cake Baby reunites creator/performer Alice Kirker, director Grace Augustine and producers Nahyeon Lee and Katie Longbottom who collaborated on the four-hour-long durational show Jelly Baby which I had the pleasure of reviewing in 2020. ‘Party for one’ Cake Baby is a shorter evolution of the Baby series (a mere hour) and a performance art/theatre piece that explores Kirker’s feelings around fatness and food, and celebrates personal and public acts of being fat in our society.

We’re introduced to Kirker’s Cake Baby through a comedic set-piece, rooted in the mostly silent, physical theatre of Jelly Baby, as she chooses which chair to sit on. This initially elicits chuckles while gradually allowing the audience to infer the difficulty and the pitfalls of choosing the wrong seating arrangement. Channeling the irreverence that made Jelly Baby so joyous, Cake Baby pokes fun at a very real anxiety that runs through a fat person’s mind in a social scenario, making it safe and silly – all whilst protecting her cake.

As charming and awkward as her first moments of the show are, Cake Baby is not the sweet, ingénue that Jelly Baby was in pre-Covid 2020 (are any of us?). In an immediate progression, Cake Baby enters wearing only underwear; a nice touch, where the climax of Jelly Baby involved Kirker stripping down to said underwear before lathering herself in jelly and washing herself clean. Cake Baby is a little older now, a little wiser and pairs this with a bright pink négligée.

However, the biggest development is that Cake Baby talks and Cake Baby has a lot to say.

My biggest personal criticism of Jelly Baby was that I felt it didn’t delve deeply enough into fat politics or provide as much personal insight as I would have liked – as it was a predominantly silent and completely dialogue-free show. I couldn’t be happier about the direction Kirker and the team chose to take Cake Baby in. Jelly Baby still managed to be an emotional and impactful theatrical experience, so, as Kirker states after grabbing the mic partway through Cake Baby:  if “you thought I was loud before” you can only imagine what the show is like now we are allowed intimate access to the thoughts of the artist behind these works.

The show has many evolving stages: from Kirker spotlighted against the brick wall of the Basement Theatre in classic stand-up fashion playing word associations with events, food and memories; to leading the audience to hide trash and repeat the word ‘fat’; to dancing around on stage and rolling across a floor covered in cream. “I fucking love food! It’s transforming!” Kirker celebrates as she recounts the true joy and connective power of food, and the freedom she gives herself to eat what she wants, when she wants.

If Jelly Baby was the little toddler merrily learning to create and destroy, Cake Baby is the teenager who has found her voice and is ready to rage. And she does. In the segment that gets the greatest audience reaction, Kirker decries elements of the fat experience that she is angry about – from Glassons to death threats to censorship of fat bodies on Instagram. These are all widely-known facts and relatable experiences within the fat community, but likely aspects that straight-sized people would be unaware of.

This lack of awareness is not new, and is perhaps more glaring within spheres and people that consider themselves creative, open and/or liberal, where there is an unconscious bias towards fatness that goes unacknowledged and unexamined. Although someone may consciously deplore weight-based discrimination, there are likely myriad ways they contribute to and suffer from fatphobic discourse. As Kirker states to a conspicuous lull in the audience’s cheering, “I’m angry that you’re not angry.”

Alice Kirker is a fantastic performer. My original quote after Jelly Baby was “magnetic”. Both descriptors apply, and this sentiment was something I heard echoed multiple times by people in the foyer after the show. Whilst it fills me with such pride and righteous joy to see a fat woman being recognised loudly and publicly for the talent she possesses, I also can’t help but mourn the talent that has been lost over the years due to fatphobia and appearance-based bias, particularly in the creative industries.

Lost isn’t really the right word. It implies passivity, as though the lack of visibly fat creators and performers within our culture is something as unintentional as losing your keys, rather than actively isolating, beating down and driving out your keys till you think the lack of keys is the preferred and celebrated state of being. The same is true for all minorities within cultural spaces, where absence is not an accident and cannot be corrected without considerate and concerted action by multiple parties – particularly those within power. Imagine if the representative audience who cheered so loudly at Cake Baby’s body-positivity power moments actually spoke with that much volume in favour, defense, and acceptance of fat bodies within our society.

It is a common, unifying and heart-breaking experience for fat people – society doesn’t see you beyond the fat. The central call of Cake Baby is a cry for the audiences to see in others, and thereby finding their own, humanity. Not by looking past the fat to the thin person within deserving of respect, but simply accepting it and treating people with empathy.  Cake Baby demands you take her as she is – a human with complex body/self politics, a love of food, a well of anger and fat.

The original sound design by Chris Marshall – from the arguably unpleasant surround sound chewing to a stirring slam-the-doors-and-jump-around-your-bedroom rock song – is cleverly used to punctuate and highlight throughout the show. Cake Baby as performance art creates its own stage as the show unravels, becoming the glorious mess the Baby series is known for – where Kirker sprays cream all over the floor before showering herself with chip fragments à la Jennifer Aniston in We’re the Millers.

It is during this section of riotous destruction that Kirker creates a true moment of beauty, bizarrely after smearing herself in cake mix and throwing herself at the upstage wall, leaving quasi cave-painting renditions of her body against the black brick. Kirker, back to the audience, considers these self-portraits – a touching and fleeting diorama that captures the power of representation through art, reminiscent of Tomas Kucerovsky’s ‘Wrong Century’.  Kirker concludes Cake Baby by becoming art herself, in a surprising but perfect final twist. Seconds before this act, Kirker mentions, as she thanks fat activists and inspirations, about how Hannah Gadsby discovered that fat bodies were common and were made into art in paleolithic times, as she stood framed by her cakey cave paintings.

The show is a delicious display of joy, rage and wantonness – a true catharsis, leading the audience through a surprising amount of emotional peaks and valleys in its short 40 minute runtime. It is entertaining, powerful and beautiful performance art and theatre. A very special and emotional show for any fat person in the audience, and a vital one for the rest. With this second evolution of Baby, I can’t wait to see if/what Kirker does next.

In Jelly Baby, Kirker gleefully took up space. In Cake Baby she commands it. And I’m hungry for more. 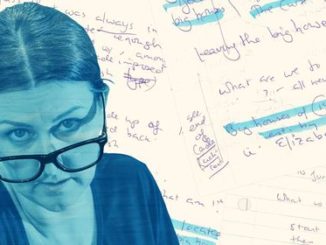 REVIEW: I Didn’t Invite You Here to Lecture Me (Basement Theatre)