Shaken, not stirred [by Sharu Delilkan]

We were privileged to be invited by Tiffany Harkess General Manager of the Christchurch Arts Festival to review and absorb the festival last weekend. Ten years after being in the city itself for me was a shock, with multiple aftershocks as one of our friends Rebecca gave us a guided walking tour of where she used to go to school, shop, drink and posted letters – so much of people’s past is now an empty lot, a wire fence, with a “KEEP OUT” sign, a red sticker, a shell.

But within those vacant lots there are sights of spring, renewal – sure the engineering work of replacing roads, buildings and drains is happening but the greatest eye opener is the flourishing creativity on the site of former buildings.

Art is everywhere, from assembled rubble to video installations, letters and pictures by children, and adults have managed to express themselves like children again.

A decade ago Christchurch seemed a bit boring for me – a bit uninspiring, a bit ‘cup of tea’ and a bit too white for my multicultural tastes. Now (it’s still a bit mono cultural) but no one can be in this fallen city without being inspired. I guess it has reminded us that cities aren’t places we live in, but are places that we build and form.

People complain about ‘the traffic’, ‘the council’, ‘the architecture’ but it seems that Christchurch’s tragedy has prompted its people to realise how much of a stake they have in their city. And they don’t just want to rebuild it, but to rebuild it better and for themselves.

The arts has become so much of a reflection of grief, pain and hope – and the citizens of no other New Zealand city can surely say they have such a well of shared experience.

It was great to find that everyone we spoke to was well and truly aware of the Christchurch Arts Festival, and many were attending, or bemoaning the fact that their pick of the month-long extravaganza was sold out. Among the most sought after tickets was Hotel – the acting equivalent of ‘close-up magic’ – all set in an actual hotel room 14 floors above the broken city and highlighting the most intimate moments of people at their most unguarded.

Strangely, all three of the shows we saw seemed to have a shattered city link, (or maybe we were supersensitive to the possibility) with Stuart Hoar’s The Great Art War set against a modernist set of an almost apocalyptic cityscape.

The venue for UK company 1927’s The Animals and Children Took to the Streets was novel, being located in the Rudolf Steiner School way out of town. The venue was made even more remote by the multiple road closures and diversions encountered along the way. Good for taxi drivers but not so good for us as we had to endure being driven opposite sides of the same river twice – the taxi meter ticking up and our nerves ticking up almost as fast, hoping we would get there in time. But get there we did, and the show was certainly a highlight.

Leaving the venue, we bumped into the festival’s head of artist liaison Kirsty Sommerville who generously gave us a lift back to the Festival Club, which was an animation in itself with artists and production crew, led by Jo Kilgour, in a bustling hive of activity.

Our overwhelming impression for the weekend was that the arts, with the Festival playing a key part, is contributing hugely to re-establishing and re-kindling Christchurch for its people.

Literally not just the rug, but the ground itself, has been pulled out from under a good many people. But the dedication, resilience and sheer professionalism of the sometimes overlooked creative sector is clearly making a difference to people’s lives.

If you think that statement preposterous, overstated and overly sentimental then go to Christchurch and see for yourself. If you aren’t moved and inspired the way we were then you heart must be made of stone – and we all know how solid and reliable stone is now don’t we… 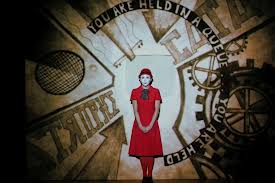 REVIEW: The Animals and Children Took to the Streets (Christchurch Arts Festival)