Good Schadenfreude to You [by Tim George]

Ashton Brown and Louise Beuvink clearly know what they are doing. Each comic has  around 30 minutes for their set, and they both rise to the challenge in completely different, yet complimentary, ways.

The show really should have been called ‘Schadenfreude – the Musical’, based on the subject matter and Ashton Brown’s gloriously half-assed introduction to the show, involving your Granddad’s dance moves and Coldplay.
Like the shy guy at the party who suddenly becomes the centre of attention, Brown sails through a variety of eclectic subjects with a nervous energy and a ready line in self-deprecation. Clearly a lot of thought has been put into the act, but he affects an attitude that embodies the ridiculous ‘she’ll be right’ mode of Kiwi machisimo, while simultaneously skewering the stereotype.
From the existential crisis of his acting experiences on Shortland Street and Power Rangers, to the moral vacuum of modern day politics, to the insidious message underpinning ‘Where’s Wally’, Brown casts a wide net. There’s a chance of a joke missing, but Brown is a good judge of material — all the bits hit, and some hit harder than others. He also manages to wedge in a bit involving smoking and infanticide. It’s marvellous.
Appropriately, the show gets darker when Beuvink takes the stage. Emo to the max, she takes the audience on a journey involving sentient (and condescending) self-checkouts, the abyss of human garbage which is Tinder, and an unfortunate incident involving a cup, a full bladder and the phrase ‘seize the day’.
While the material is relentlessly, and gloriously misanthropic — other memorable parts include going on a flight just so you can have a captive audience for unloading your emotional baggage; a rather unflinching examination of alter-ego ‘Drunk Louise’; and a blackly comic interlude about abortion — there is something rather empathetic and engaged about it all. Despite her air of disaffection, Beuvink  cannot help but keep giving a shit. It’s great.
Overall, highly recommended. Check it out while seats are still available.
Dark Side of the Afternoon plays as part of the NZ International Comedy Festival 2015 at Q Cellar until Sat 16 May. Details see Comedy Festival. 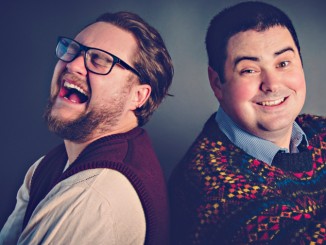