A slice of Cornish Pasty [by Sharu Delilkan]

Two Cornish rappers and a Casiotone keyboard – that was pretty much all I knew when I got to the gig at Cassette Nine last night. Why not, I said to myself, particularly since we’ve recently seen big balls, classical music hooliganism and mesmerising mime mania, why not Hedluv + Passman?

We thought safety in numbers would be appropriate so we invited a few workmates along to check out this ‘experimental’ experience. The result was shock horror, a great deal of hysterical laughter and general light-heartedness all round in response to this “quirky” and “irreverent” duo.

It was not long before we were introduced to Casio rap, a genre where lyrics are laid over simple homemade beats. In fact the best way I would describe them is akin to the famous 1980s English electronic pop duo Pet Shop Boys on acid. Passman is very similar to a manic Neil Tennant who provides main vocals, and this case occasional percussion while Hedluv is more like a gormless Chris Lowe on keyboards providing deadpan occasional vocals. The contrasting characters on stage really worked giving the whole show its tongue-in-cheek tone.

To quote their manager Murray Hewitt aka Rhys Darby “I haven’t seen this much talent since The Conchords and even then I never saw that much talent.” To be honest I had no idea that Rhys was their manager. The idea of life imitating art i.e. him acting as their manager, like Murray, really tickled me pink. No wonder he was all attentive and jumping up and down throughout the gig. In fact at one point he even went up to them on stage and advised them to use the crappy microphone which he said “works better than the good one”. All was explained when I came home and watched the Seven Sharp (TV1) excerpt featuring the duo introduced by Rhys.

The best thing about the entire show was its chaotic, unpredictable nature. Not knowing what was next, left you gagging for more each time they took the 30-second break between songs, for Passman to catch his breath. We initially sat there gob-smacked, witnessing this absolutely inane performance but then upon reflection it dawned on us that the comic duo was totally genius. I must admit I felt my hubby and I enjoyed the show a tad more than our mates, mainly due to the age difference. Memories of music, with the Casiotone sound of the 1980s, came flooding back – something I believe some of our mates were a little too young to appreciate fully. No they can’t be stereotyped or you can tick a box to classify their genre but who wants to be stereotyped? To quote the dynamic duo “We’re just two musicians doing our best” and that’s all we as audience members could ask for.

Isn’t it better to push the boundaries and experiment rather going to a show that only does what it says on the tin? Which makes Hedluv + Passman the perfect combination for a Festival act.

So my advice is get down to Cassette Nine before Sunday (show closes on Saturday) and be brace yourself for an hour filled with silliness and unconventional ‘comedy’. Oh and a few bevvies to wash down the yummy Cornish Pasties beforehand can only enhance the experience even more. 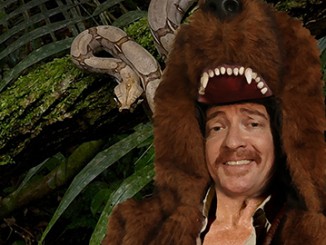