Comedy fest favourite Jimmy McGhie returns to Kiwi shores after winning the hearts of New Zealand last year with his British charm. With his impeccable storytelling, and quick witty banter, it is no wonder he is regarded as one of the UK’s most exciting acts to hit the comedy circuit.

The cockney geezer transports us back to the streets of London as he jokes about his posh private school upbringing and his dictator daddy. As he reveals his parents messy divorce and shared stories of his father’s infidelities, I don’t know whether to laugh or cry.

Along the way McGhie makes amusing observations about the peculiarities of NZ culture and pokes fun at what Kiwi’s deem newsworthy, which strangely leads to a discussion about the order in which milk should be poured in a cup of tea (to which we still don’t know the answer).

The English gent knows how to work a crowd. McGhie was continuously interrupted by a heckler and he dealt with the interjection with ease, even making her part of the act by giving her the nick name ‘Wikipedia’.

Comedy comes naturally to the Londoner as he brings in the laughs pondering the existence of walking lanes in Australian swimming pools. His expressive features alongside his knack of delivering a pretty decent Kiwi accent leaves belly’s quaking and jaws aching.

At times McGhie appeared a little lost in his own trail of thought and had to keep referring to his ‘cheat sheet’, as a reminder of  what’s to come, but just when we thought we’d lost him, he’d reel it back by delivering a cracking one liner.

From appreciative laughs to audible aww’s, this is a comedy show where you inadvertently find yourself getting involved in.

Jimmy McGhie performs at The Classic until 13 May. Details see Comedy Festival. 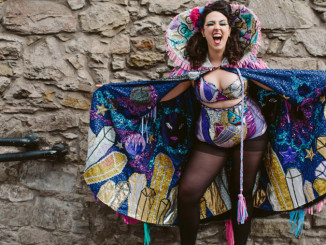