Following on from themes addressed in his solo show last year, Tim Batt’s Unified Theory, Billy T Award nominated comedian Tim Batt once again joins forces with his audience in a bid to make the world a better place. From his proposals on a new form of government to the focus of public service announcements, Batt reflects on how and why we’ve come to believe what we do, which allows him to address the crux of what he believes is a universal problem; fear.

In addition to his logical and scientific arguments, Batt takes it upon himself to address audience-specific fears, from waking up next to Brian Tamaki to praying mantis(es), offering direct, if not obvious, solutions to any and all problems. That’s not to say that Batt is supercilious or nonchalant, or plummets into a diatribe, simply that he is open and willing to take things head on and engage his audience. This reflective pace is, however, excellently balanced with the odd incredulous outburst and cynicism of a young white male torn between his Generation Y birthright and fundamentally philosophical views.

Throughout it all, Batt is aware that saving the planet is not a solo job, and encourages the audience to climb on board with his proposals. He’s also aware that an individual proclaiming such a fate is need of the mandatory origins story, and, with this, cleverly ties the motivation and objective of his show together. Tim Batt Saves Planet Earth is perfect for audiences who want laughs, intellectual stimulation, and maybe even to rid themselves of a fear or two.

Guy Montgomery’s improvisational skills have been proven time and time again, both in Snort and Kiwi Heroes. His dexterous vocabulary allows for a seemingly endless combination of ludicrous analogies, metaphors, and scenarios, both as participant and host respectively. It’s a fundamental comedic skill, but not one easily executed by all. Montgomery, however, seems to have an endless array of words and phrases stockpiled for any situation.

There only appear to be a handful of ‘bits’ in Montgomery’s solo show, with the majority of the hour padded out with apparent riffs on random thought processes or rhetorical dialogues with the audience. That could, however, be part of a tightly constructed act which is simply impossible to deconstruct. While there’s a certain rhythm Montgomery falls into when creating a specific scenario in which he’s going to delve, it seems almost impossible that someone could hold an entire audience’s attention for the remaining 30-minutes off-the-cuff. Either way, there is an extremity to Montgomery’s style that separates him from other New Zealand comedians and has earned him the reputable title of Billy T Award nominee.

The few scenarios Montgomery constructs, sometimes through association, other times through ostensibly random tangents, play out like a sketch television show, with the odd call back loosely linking things together. One set up in particular, has all the ingredients for a potential web-series – the precisely unspecific title of the show is indeed apt. Montgomery’s physical looseness and nonchalant attitude curb his Will Ferrell-esque absurdity with an affable New Zealand exterior, giving him accessibility to the full demographic of his quite diverse audience. For a mad-cap hour of hilarity, this is a show you will not want to miss.

If you could write a letter to your 8-year-old self, what would you write? It’s a question many people have asked themselves, and it’s the premise of comedian James Roque’s wittily titled 2014 International Comedy Festival solo show, Roque to Self. From his early days in the Philippines and introduction to New Zealand spreads, to the complexities of prejudice and the opposite sex, Roque examines his past fifteen years and narrows his letter down to a few titbits on how his younger self could potentially get through them.

This narrative structure works well, and Roque even throws in a few curveballs to prevent it from becoming too repetitious. As technical support becomes somewhat of a staple component to the new generation of Auckland comedians, it’s inevitable that some will suffer form Murphy’s Law. Roque is no exception, however, this affords the opening night crowd a viewing of his deleted scenes. It’s a minor glitch, and a part of the show that isn’t heavily replied upon, or at least Roque deals with it extremely well for the remainder of his set.

There are plenty of admittedly specific pop-culture references in his material, but they’re broad enough to understand, and Roque’s acknowledgement and slight frivolousness make them ultimately inconsequential to the audiences’ overall ability to enjoy the show. It’s an example of great balance between material and delivery. Said delivery is not as aggressive as others in the festival, and Roque’s easy-going nature results in an affable comedian with whom the audience can connect.

This connection is important for not only generating a rapport with the audience and a empathy in some of his stories, but also bringing home the point with which Roque ends the show. It’s a lesson in growth, which anyone at any age will understand. 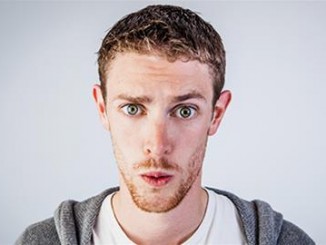