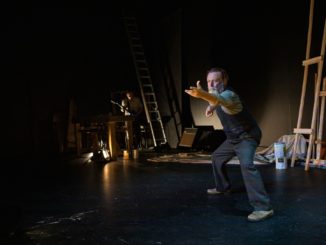 Now how to express my experience? [by James Wenley] Tribes comes to Auckland’s stage with a babble of hype and expectation. Only playwright Nina Raine’s second play (after Rabbit which Silo performed in 2008 ), it’s something of an international critical darling after its debut at London’s Royal Court in 2010. Just last week it won New York Drama Desk’s […]
1 2 »