When Kip Chapman saw Black Confetti at Auckland Theatre Company’s The Next Stage programme last year, he knew instantly he had to be involved.

“I approached Philippa [Campbell] as soon as the reading was over because I thought it was an amazing script that reminded me of Odysseus going into the underworld. I was even more impressed that it was written by the young playwright Eli Kent, because it was such a grand idea. I also thought it was incredibly funny with great depth,” he says.

Written by the award-winning writer Kent, Black Confetti is packed full of big ideas and a squillion little surprises. The show about surviving the earthquakes in our lives, which include poetry, mysteries and full-on theatricality.

As the main character Siggy, Chapman is a Generation Y casualty. He has maxed out his student loan; university is ejecting him; his uncle is behaving strangely; and his father, a famous seismologist, has disappeared off the face of the earth.

Being in his 30s, Chapman says he has relied on looking towards fellow actor Sampson to gain insight into Gen Y.

“Nic is a great example of the Gen Y – he is constantly on Twitter and it helps that he’s very funny. He writes plays, performs in them – he basically can do a bit of everything. It is great working with him and being able to use him for inspiration, particularly since he’s a great example of the type of character I’m trying to portray,” says Chapman.

I must admit I couldn’t resist getting a response to this comment so I naturally contacted Sampson to get his reaction.

To be honest his initial outburst of laughter was unexpected. But once he had composed himself he admitted “I guess I’m in that demographic. Eli is my age so we have grown up in the same circles, so I suppose I am a typical Gen Y,” he says.

Sampson also says that he was elated to be working with Chapman again.

“We recently worked on The Hackman Awards together so it was great to rekindle that energetic spark on stage. His energy and enthusiasm is totally infectious – he makes you want to step up your game to the level he’s working at,” adds Sampson.

Besides the Gen Y flavour of Chapman’s role as Siggy, he admits he has never learned so many lines in his life. So it’s not surprising that he has been getting up really early and going to bed very late to master them.

“Basically the journey happens around Siggy and he is on stage all the time. Like the poster image, Siggy is basically falling through his journey in life,” says Chapman.

Siggy is also incredibly intelligent and has the gift of the gab.

“I absolutely love the dialogue. In fact it is some of the funniest dialogue I have had the opportunity to play with as an actor – which has been an absolute treat. Imagine if someone could write those come backs for you in real life – wouldn’t it be awesome?”

REVIEW: The Black (The Basement) 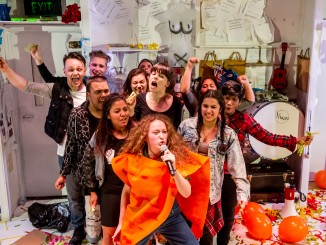