[A Comedic and Musical Meditation on Grief]

The doors to the stage open and I am greeted with this immense sense of liveliness. Barnie Duncan, our sole performer, is playing a bass guitar, ushering us in with music and smiles as though he knows each of us personally. Above him is an LED sign reading, “haere mai” and “welcome”. Something about the music and the set up is so full of presence and immediacy. It really does remind me of that particular sense of pure humaneness one feels at a club.

Duncan’s performance deals with grief, nostalgia, joy and the purest emotions of being alive. The comedy in Bunny is such a balanced blend of humour and emotion. The surrealist moments bring an originality to the stage and explore the absurdity of life – it is truly such a strange thing to be human, to feel and experience profound things. Duncan deals with such topics with grace, softness and a very conscious sense of humour. This is something I enjoy about Bunny. Duncan makes these astute and wonderful observations about life and grief in his comedy, and he pairs these sensitivities with perfectly timed comedy. Bunny jumps between topics so deftly, interlacing truth and nonsense into a single narrative. This show reminds us that incongruent emotions can coexist all at once.

I initially thought the LED sign would only be an aesthetic decision, but Duncan’s use for it was genius. This sign became a hilarious title card, adding an extra layer of humour to everything Duncan says. This is something I am astounded by with Duncan’s performance: there are so many layers of visual gags, physical humour, absurdist comedy. Liv Tennet also brings another level to Duncan’s performance through the choreography. There is a real sense of purpose and meaning in each movement.

Dick ‘Magik’ Johnson’s original soundtrack for the performance is astounding. A pulsating beat that moves and swells with Duncan’s exploration of grief and humanity. The music quickly becomes an integral part of Duncan’s performance. I love how effortlessly clubbing music is woven into the themes of the show. Duncan uses looping audio to manifest those certain profound and ridiculous moments of human experience and emotion. My favourite being the scene of Duncan in a club bathroom, the looping dialogue of an audience member acting as a random thought stuck in his head.

Bunny is so real and honest, there were moments I was barely even aware that I was sitting in a performance. I was enveloped in the laughter and the feeling of Bunny. I was not thinking, but rather, experiencing. It is a rare and wonderful thing to be in a performance and to simply be.

This show reconciles with the overwhelming grief of losing a loved one, but also with the strange feelings and memories we experience as humans. I still have not stopped thinking about Bunny, chuckling to myself about some of the gags and meditating on Duncan’s comments. This is a strong performance by a strong comedian and musician. Bunny is powerful and it is human and it is bloody funny – a truly fantastic and unforgettable show. 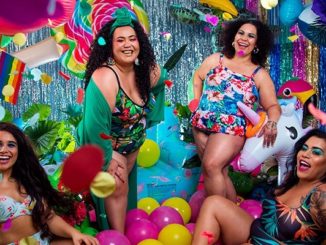