An Experience Not to be Missed (And If You Did, It’s Too Late, Shame on You) [by Rosabel Tan]

Crowded at the bottom of the stairs to the Wintergarden are a chorus of ladies (and a few men) in togas. As we descend, one of them kisses us on the cheek, another offers us grapes, and yet another points us towards our table, nestled in the centre of the cabaret-style seating.

Given the warm welcome, it’s unsurprising that the crowd are in lively spirits – it’s also late, and in true bacchanalian fashion the liquor is flowing and for a moment the atmosphere feels more party than pre-show, but then the lights dim and Barnie Duncan and Trygve Wakenshaw hit the stage. Kicking things off with a rendition of Istanbul (Not Constantinople), what follows is a loose history of this “city of syllables”, presented in a series of sketches that are charming and absurd in equal measure.

To describe these sketches would fail to do them justice (and would end with an awkward silence and a stammered, “uh, I guess – I guess you had to be there”), but what I will say is that is ridiculous, dumb humour done incredibly well. The show also features miming – brilliantly synchronised with Joe Bax’s sound design – and prop improvisations that range from the use of a button mushroom to denote a detonating bomb to the endlessly imaginative array of ties worn by the narrator, played by Duncan. But the real strength of the show are Duncan and Wakenshaw themselves: playful and brazen, the pair have the charisma, energy and impeccable timing that lets them pull of the kinds of gags that in less able hands would fall flat.

At the end of their show, we’re invited to stay and celebrate its swansong: swirls of dry ice fill the room and the silhouette of special guest DJ Bevan Keys appears at the top of the stairs; the tables are cleared and the chorus weave their way through the crowd to perform a dance, choreographed and vivaciously led by Jess Holly Bates. It’s this attention to detail – and the way the same energy and playfulness filters through to all aspects of their production – that pushes Constantinople from being just a show to a bona fide experience.

Having missed the original incarnation of the show, it’s not clear how much Constantinople has evolved over the past year, but as it stands right now – in its last days – it is tight, seamlessly executed, and wonderfully unique.

Constantinople was presented by Theatre Beating and STAMP for the 2012 International Comedy Festival, 11th & 12th May. 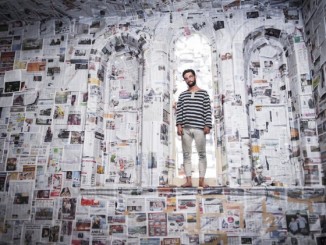