The false illusion of immersive theatre is that the audience co-authors the play with the theatremakers. That without the audience the play would not be the same. But the reality is most interactive theatre experiences are as pre-determined and scripted as any conventional ones. Any sense of freedom or choice is mostly manufactured, never rising beyond a clever gimmick.

While not strictly a piece of immersive theatre, Don Juan utilises many interactive theatrical techniques to engage the audience with the narrative. It’s to Wellington theatre company A Slightly Isolated Dog’s credit that Don Juan works despite being unable to find solutions for these problems. Their modus operandi seems more concerned with showing the audience a good time, and they do it well.

Less adaptation and more parody, in this retelling the story of Moliere’s oft-referenced classic, director Leo Gene Peters and his team invite the audience on an episodic romp through Don Juan’s adventures. In a lightly metatheatrial fashion, the play comes to life before our very eyes using narration and reenactment. The bad boy attitude of its titular anti-hero is embedded in the DNA of the show, displaying a riotous and mischievous energy, while keeping it tasteful, even amidst the many sex jokes.

Armed with intentionally bad French accents, the performers are a charming and talented bunch made up of Susie Berry, Jack Buchanan, Tim Carlsen, Andrew Paterson and Comfrey Sanders.  Though they aren’t exactly the most fleshed-out characters, each personality is well-defined within the world of the play, especially in their relationships with each other and the audience. So while the narrative doesn’t demand they be anything more than tour guides, we’re treated to something far more engaging than dealing with plot devices. In a show with many pulsing moments, their performances always feel the most ready and alive, as if waiting for an opportunity to steal the spotlight form one another (but failing because they’re all so evenly matched).

While the opening of the show is a nice warmup for whats to come, the appearance of Don Juan is when things truly come alive, with as satisfying a character introduction as any. The actors take turns to play him, personified by wearing tacky sunglasses and a baseball cap. And if the construction of our infamous womaniser isn’t stylised enough for you, his dialogue is also lipsynched, spoken through a microphone by a separate performer, adding an comedic overdubbing effect to his speech.

Though audience participation can often feel icky and coercive, often pressuring people to fake smile and awkwardly laugh their way through discomfort, these performers avoid those pitfalls by handling the selected audience members with a gentle confidence. They give enough guidance to participants (often feeding them lines) so no one ever really feels in danger, but also enough room for people to be imperfect or surprise us with unexpected prowess. It’s a considerate approach that really opens the audience up, rather than having them fret about being picked the whole time.

This gentle approach recalls Tim Crouch’s I, Peaseblossom, performed at the Musgrove Studio last year, who supplied participating audience members with cue cards. Those who saw it on opening night may be familiar with a terrifyingly real moment of failed interaction, where someone flatly refused to play the game, despite the relatively minor involvement asked by Crouch. It’s hard to imagine the same problem arising in Don Juan, because the environment cultivated by the team is much clearer as a communal event. But the risk is always there.

Outside of the possibility that someone flat out refuses to play along, there’s possibly too much method in this madness. For all its playful anarchy, there’s rarely any sense that something could change or rules could be broken. The narrative moves strictly in one direction, and the audience ultimately doesn’t have any real agency, calling into question what we mean by “passive” vs “active” audience members.

Regardless of whether Don Juan interrogates the relationship between performer and audience in a particularly new or challenging way, what it does do, it does spectacularly well. That is, it embraces the audience-performer relationship and makes it transparent, creating a piece of theatre that could only ever be theatre and nothing else. And it’s ultimately the consistency and ingenuity in which these techniques and games are employed that makes it feel fresh. From the very onset, before the show even starts, the show is plotted around the audience, the actors mentally taking down notes of us, all while remembering their lines and building fresh and genuine rapport. It’s the exact sort of the show that criticism can never really do proper justice to, because to discuss what it does so well would be to both spoil its surprises and reduce it to nothing more than dramaturgy. But the best moments of the show simply do what the best of any theatre does, in asking us to suspend our disbelief even though we’re in on the lie.

The weakest elements of the show have more to do with its narrative beats, which never rise beyond being an excuse to play with the audience rather than tell a compelling story. Don Juan is an effective and enjoyable backdrop, but there’s always the feeling that the format of the show has yet to reach its full potential with the chosen source material. This never results in being a major obstacle though, as its the way the story is told that makes Don Juan successful, rather than the story itself.

Playwright Howard Barker, in Arguments for a Theatre, says the question of ‘What kind of theatre do we want?’ is best answered from the point of view of ‘What kind of audience do we want?’ If that’s the case, Don Juan wants us to be creative, inspired and feel alive. To feel connected to the stories being told, in a very direct way. It’s a surprisingly simple provocation, but one that most theatre rarely asks of us.

For those interested in a fun night out, you’d be hard pressed to find a better alternative. Even those normally squeamish of interactive theatre will find plenty to enjoy, from the theatrical ingenuity to the way it provokes our imaginations. You’re unlikely to see anything quite like it. Or, if you’re like me, it will raise some interesting questions about the role of the audience and the sort of theatre we’re making in New Zealand, offering up some interesting possibilities and alternatives in our ever-changing theatrical landscape.

Don Juan is presented by Q Matchbox and A Slightly Isolated Dog and plays at Q until 12 Nov. Details see Q. 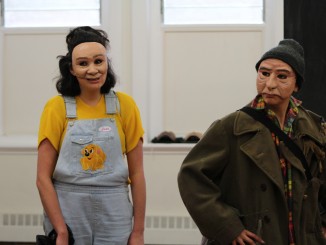