[Keeping the Light On]

Three actors are on stage as we take our seats in Studio One Toi Tu. One clicks something on and off. One slowly pours sand into a bucket. One holds balloons and teases the audience with the thrill of popping them, but never does. From this set-up alone, I knew we had entered the realm of the absurd. But what I didn’t predict was how genuinely hilarious and heartfelt this show would be.

Matt Cameron’s 1995 script combines clowning and wordplay with existentialism to create an accessible absurd comedy about three hermits – Ollie (Mustaq Missouri), Enzo (Hamish Annan) and Margot (Irasa Siave) – living in a lighthouse with no light. None of them seem particularly concerned with changing the lightbulb and, as a result, ships often crash and suitcases wash ashore. The three live out their probably pointless routines, isolated both from the world and each other. That is until one day a clown (Susannah Smith-Roy) washes ashore and shakes everything up.

This is a story about isolation and connection, highlighting both our need for connection and our fear of it. Dolores the clown provokes our three hermits, challenging them to change, to take risks and to love. Of course, the characters are comically terrified of these things. Yet their desire for something more than simple routine is palpable. Like all of us, these characters desperately want true connection, but are afraid of the vulnerability and self-reflection it entails.

Director Katie Burson establishes the various locations inside and outside the lighthouse with clever use of the minimal set (designed by Rob Byrne, and filled with impeccably quirky suitcases).

All the technical elements are well-integrated, with the possible exception of the music. Chris Marshall composed a beautiful score for this play, and I only wish it hadn’t cut out abruptly in several places. While I assume this was done deliberately to highlight a tense moment on stage, it only served to temporarily take me out of it.

The cast, meanwhile, carry the show masterfully. Their excellent chemistry and comic timing sees them navigate fast-paced dialogue as well as poignant, dramatic moments, all while striking the perfect emotional tone to match the absurdist writing. These kinds of scripts, though they can be funny on paper, can be difficult to bring to life in such an engaging way. But this cohesive team certainly manages it.

“Mr. Melancholy is a timeless play which explores themes that have become all the more pertinent under the spotlight of the current times,” says Burson in her director’s statement. “Loneliness, solitude and existentialism have taken on new forms as we navigate this shifting world.” Indeed, in a time where face to face and skin to skin interaction can be dangerous, the characters’ fears take on new meaning. Their struggle to get by in an overwhelming world reflects the coping mechanisms we all take on when massive change is introduced. Like Enzo sending messages in a bottle, we cling to hope. Or we busy ourselves with mundane tasks, like Ollie shifting sand in a vain attempt to steal the beach. Or perhaps, like Margot, we relentlessly try to keep everything the same. But Mr. Melancholy exposes the futility of these actions. Refusing to contend with our reality – with our desires and our losses – will get us nowhere, it seems to say. Instead, it reminds us of the importance of true connection, despite how difficult or scary it might be.

It’s a beautiful message in these strange times, made all the more so by the irony that this performance was nearly cancelled due to the recent Auckland lockdown. But, thankfully, the lights can stay on in theatres around the country, and we can sit next to friends and strangers and be challenged to reflect.

The play doesn’t serve up simplistic happiness for its characters, instead mirroring reality more closely. We don’t always get what we want. We don’t always manage to change, or maybe we’re too late. Ultimately, though, for all life’s failings and disappointments and melancholy, the characters do manage to find a light in the dark. 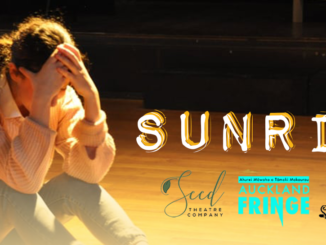