Sweetness in Shortness [by James Wenley]

I reckon the art of a good 10-minute play is a decidedly tricky one. Whether it leaves you laughing or with something more to think about, within those 600 seconds it generally has to traverse the entire three act structure from inciting incident to satisfying conclusion.

The Short+Sweet festival, compromising of very strictly determined 10-minute plays (run over time to your peril) started in Australia and has been expanding internationally ever since. Last year it debuted in Auckland to something of a theatre vacuum in January, introducing many new theatre faces. Its sophomore year sees it return to the Herald Theatre, now in the middle of the year, with a potent mix of both established and new thespians looking to make magic in 10 minutes or less. This year has a larger focus on homegrown work, though Australian and American plays represent the international part of the festival.

Auckland audiences have been treated to the first ten plays of the festival this week. The evening moves swiftly, a well-oiled stage crew handling the many set changes with speed.

Morning in Suburbia, directed by Simon Ward, was the first play of the night, but unfortunately was a rather low key start. Bronwyn Elsmore’s script was a gently comic look at a mother’s group where a young, first time mother (Chelsea Louise Smith) learns about certain aspects of birth. Namely, the placenta. Group leader Pauline (Veronica Brady, delightfully kooky) is a big believer in a mother eating it. The script only delivered shallow insight into the subject, and the darker side of me would have liked to have seen the premise taken much, much further…

Romantic relationships going wrong became a dominant theme of this particular grouping of plays. In A Bit of a Blow (playwright Lynn Lobban, Director Reynald Castaneda) married couple Hunk (Michael Morris) and Emma Newborn (Gwennie) discuss Hunk’s infidelity (a blow job from another woman) in a very open, tension filled way. Both characters, repressed beyond even Freud’s assistance, try hard not to care. Things finally come to a head (so to speak) in a rather blunt, audience pleasing ending – though I couldn’t help feeling that the rest of the play was really only there to serve this final one-liner.

Lithium Kiss (playwright Peter Larsen, director Matt Baker) gives us another relationship in trouble. Simon (Coen Falke) visits former lover Justine (Rachael Blampeid) in an asylum. She is convinced that she is the sanest person there, though her rants soon suggest otherwise. Blampied is great when her sweet disposition breaks and she abuses other patients. We’re left with a very downcast feeling; Justine’s hopeful delusions are never going to become reality.

Curiously, two sets of Jack and Jill pairings in two different plays provided the real heart of the night. The first, titled Jack and Jill, was the second play of the night that quickly helped pick up the pace of the evening. Ben Van Lier’s play is about two strangers Jack (Pete Coates) and Jill (Kate Lumb) who meet while jogging (always a great way to deal with exposition and backstory). Over the next few days they learn more about each other – he’s unemployed, she’s a housewife, and a mutual attraction slowly seems to grow. The comic chemistry between Pete and Kate is very enjoyable, and the play transitions between comedy and pathos with ease. A simple and familiar premise that is well acted and told, and an early highlight.

Perfect, which closed the first half, sees the second Jack and Jill pairing of Leisha Ward Knox and Coen Falke (playing two roles on the night). Theresa Cloonan’s script is an intruiging little piece about a disintegrating relationship told much more intriguingly than A Bit of a Blow’s one-note exploration. Jack and Jill have been in the same room for the some time, though it seems to be falling down around them. Their deep love initially seems to be good to be true, and sure enough, cracks soon appear. He says that change is bad, then asks why things can’t change. She recognises there is no ease in love, then desperately hopes against hope that change won’t come. Mike Dwyer’s direction elevates the script with dynamic physical interaction between the actors, who leap, spin and clutch each other tightly.

Two plays broke the mould in trying to do something different, which was appreciated amongst some of the other more conventional plays. In Donkey Skin, Virginia Frankovich (who wrote the play together with director Benjamin Henson) casts a striking figure as she stalks onto the stage wearing a blood soaked skin of a donkey (what a costume!). Adapted from a little known Perrault fairytale, she assaults us with a tale of woe about her life as the daughter of the Butcher King and Queen, and a father who wants to get too close to her. The script is dripping with imagery, and the description of the art of butchery was memorable. Virginia does crazed and intense almost too well, though she could work harder to let us in more and gain our sympathy, if only to slit our throats afterwards.

Shanty opens with a chorus of dancers, swaying in blue light, who help tell playwright Keziah Warner’s salty tale about a Captain lost at sea. It was a breath of fresh air to see work of this kind, though more development is needed to fully realise the idea. The play focuses first on Leigh Fitzjames, who tells us her husband is missing and she needs to find him. Then we shift to James Crompton’s Captain, presumably her husband, who set out to find the edge of the world, but is now all that remains of the crew. I found the image of the woman, looking for her doomed husband the more powerful idea, and Keziah could consider moving the focus. The writing was too declamatory at times, and I wanted less speech, and more action from the chorus (choreographed by Zahra Killeen-Chance) who were under-utilised.

The last three plays to mention can be loosely grouped in the ‘broad comedy’ category.

Game On (playwright Renee Boyer-Willisson, director Bruce Brown) follows three flatmates (Lane Twigden, Gwendoline Taylor, Gracie Taylor) as they try to entertain themselves on a Friday night. The initial conflict revolved around “Who has the remote?”, though, thank god, the dramatic conflict is revealed to be a little more interesting. The characters, who pepper their sentences with too many actually’s, are grating caricatures of uni students. The discussion of people who say ‘LOL’ instead of actually ‘laughing out loud’ has been done to death, though I couldn’t help letting out a giggle or three when the male flatmate comes out with an exhaustive list of alternative names for the penis.

The show finishes on a large high with Because the World needs Unicorns (playwright Cerise de Gelder, director Eryn Wilson) which finally explains why we don’t see Unicorns anymore. Semu Fillipo plays Noah, who God has delegated to ensure that only those animals that are on the list gets onto the Ark. Morgana O’Reilly, definitely one of my favorite actresses, plays a superb unicorn while Fraser Brown plays a rather dapper dragon. Scene stealing moments from all the actors, and just a damn funny script, if lacking just a little production polish.

My absolute favourite of the night however was Outsourced (playwright Gary Stowe, director Hera Dunleavy) about a business woman who charges her secretary with finding an escort for her husband on the occasion of their 10th Anniversary because she would much rather work (again, a relationship in crisis play). Andi Crown’s Kathyrn is a brilliantly funny creation, well matched by Mikassa Cornwall’s eager to please secretary. Both women have huge hair and even bigger earings, channeling 80s excess. Andi Crown makes me laugh with her facials alone as she types messages on her computer to her secretary, sitting right next to them. It’s a well paced script, with a very deserving ending to boot.

Overall the program of Short+Sweet Week One was a mixed one. There were some definite highlights, though other plays were weaker and less assured. I would have liked to see a more diverse group of plays, with a greater range of thematic interests. The beauty of Short+Sweet is that there are always more plays to look forward to. See you next week!

Short+Sweet plays at the Herald Theatre until Sunday 17th July . More information at The Edge. 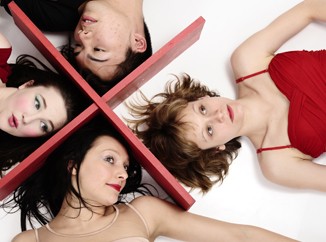