With Silo’s Medea and the return season of The Book of Everything, 2016 has been a good year for young characters on the big stage, proving that the universality of stories is dependent not on subject matter but execution. Adding to the mix is Auckland Theatre Company’s long-awaited production of The Curious Incident of the Dog in the Night-time, based on Mark Haddon’s novel and adapted by Simon Stephens.

The elephant in the room with this production—at least for myself—is that it’s coloured by my previous experience with the NT Live production that was screened in cinemas. But while the two productions share more than a passing similarity, director Sara Brodie does a wonderful job creating a production that more that succeeds own its own merits, even if it invites inevitable comparisons.

Our lead character is Christopher John Francis Boone (Tim Earl), a 15-year old boy who is isolated and overwhelmed by human interactions and the outside world to the point where simply walking down the road can become a frighteningly intense ordeal. Christopher is, however, preternaturally gifted in all subjects regarding mathematics, astronomy and pure logic. It’s telling that Christopher is never explicitly referred to as being autistic; the play never inviting an oversimplification or labelling of the character, allowing the audience to share his perspective rather than just observing him. We don’t approach the world pitying him, instead we’re with him every step of the way.

Though the catalyst of the story is the murder of neighbour Mrs Shears’ dog Wellington, and Christopher’s subsequent mission to find the killer, this is merely a catalyst for our hero’s personal journey. This idiosyncratic combination of bildungsroman-cum-detective novel-cum-domestic drama proves to be a uniquely life-affirming story about overcoming alienation and being forced to interact with the larger outside world. Of surmounting seemingly impossible obstacles and discovering limitless possibilities.

Even without having read the novel I can say Stephens’ text is masterclass in adaptation, lending the show a first-person perspective that is clearly rooted in the source material without sacrificing any sense of theatricality. While it’s structured as a play-within-a-play it’s only lightly meta-theatrical, acknowledging the artifice of the medium without forgetting the story is what’s important. At worst, the 2 hours 40 minutes (including interval) running time is definitely noticeable. The first half, in particular, with mostly world-building and showcasing theatrical conventions borders on repetitive. But once the play finds it footing, moving away from the murder mystery and towards the mystery of people, it is impossible to take your eyes off of.

Despite being focussed on Christopher’s world, the adults and parental figures are portrayed with nothing close to caricature, their flaws always grounded in very realistic circumstances. The parental figures of the play, Ed (Wesley Dowdell), Judy (Hera Dunleavy) and Siobhan (Siobhan Marshall) all shade the play with a serious undertone that clashes powerfully with Christopher’s innocence. Dowdell and Dunleavy, in particular, find a harsh desperation in their performances, offering grit in exchange for sentiment. The result is a play with a darker touch than the original. Marshall, on the other hand, offers a much needed balanced hope and serenity.

The rest of the ensemble are also on fine form, never failing to maintain great credibility with their various shifting roles, accents and also doubling as effective stagehands, again calling attention to the artifice of the play. My only reservations are the more intimate moments between two characters risk being undercut by the ensembles’ reactions or judgements as they watch scenes play out.

But it’s Earl as Christopher who rightfully steals the show in the lead role. Whether he is emitting an ear-piercing groan as he cradles himself on the floor or tentatively bridging a human connection with the adults who surround him, he nails all aspects of the performance, running the full gamut of outright unpleasantness through to unexpected hilarity and human warmth. The best praise I can offer is I can’t recall anything that made his predecessor in the role superior.

The space fits perfectly into the Rangatira space at Q Theatre. The audience enters a square arena with tiered seating on the ground floor or a view from the Gods. The stage itself has been arranged into a geomertric outline of white squares, with additional white cubes hanging from the ceiling, which produce refracted images of galaxies, ticking numbers and Pythagorean formulae, aptly demonstrating the exacting and far-reaching nature of Christopher’s mind as he attempts to express his prodigal abilities to the audience and the characters who inhabit his world. While design team of John Verryt (set), Tim Gruchy (AV), Thomas Press (sound), Kirsty Cameron (costume) and Jo Kilgour (lighting) seem to have taken more than a handful of footnotes from the National Theatre production, the whole thing is for the most part a triumph of collaboration which has no doubt been achieved on a fraction of the budget. The overall impact is a visually immersive landscape that allows the suspension of disbelief we need to enter Christopher’s mind. It’s unfortunate that this aspect of the production doesn’t have the same WOW factor for someone who’s already seen the play, but it’s a minor nitpick that won’t affect most viewers.

Where the National Theatre inspired a sense of whimsy and childlike wonderment, Auckland Theatre Company capture the dark side of growing up. If you’ve never seen any iteration of The Curious Incident of the Dog in the Night-time (live or on screen) it’s essential viewing. Despite not totally breaking free from the shadow of the original production, it succeeds on its own merits. See it for the masterful script, the fantastic ensemble work and, most of all, the breakout performance by Tim Earl.

The Curious Incident of the Dog in the Night-time is presented by Auckland Theatre Company and plays at Q until 14 August. Details see ATC.

SCENE BY JAMES: To Support the Arts, buy a Lotto Ticket… 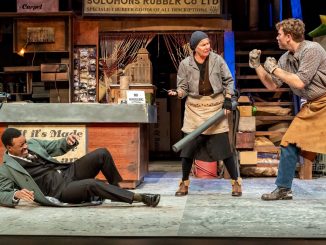 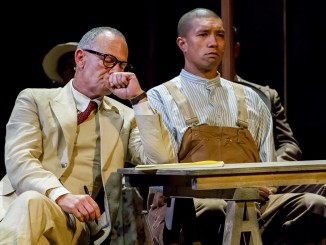