Jack Hartnett and Not Psycho are two new works to debut as part of Q Presents this year that are ambitious, theatrically exciting, yet narratively-flawed works. In the first of a new series of occasional blogs giving his perspective of the Theatre Scenes in Auckland, Theatre Scenes Editor James Wenley asks if we are doing enough to ensure works like these have the best chance of success.

When certain British news rags broke the review embargo and published reviews of the very first preview of Benedict Cumberbatch’s Hamlet, the theatre community worked themselves up into an antic disposition. Granted, these weren’t “real” critics, but columnists, but publishing preview reviews broke the sacred agreement that critics don’t touch a production until it officially opens – which is often weeks later in the commercial theatre. While social media and audience blogs does make this agreement look increasingly archaic, the argument is that previews are crucial to developing and refining the show. In Hamlet’s example, the ‘To be or not to be speech’™ started previews at the beginning at the play, but is now it is reported to be back in the middle. By the time it actually opens, no doubt the speech will be delivered at the end after the audience have all gone home.

If this all seems a bit foreign here, it’s because we don’t have a culture of previews. Cumberbatch’s royal Dane gets all the luxuries. And this is for Hamlet. Hamlet! Only the most famous play ever. Previews can be useful for any new production, but if it is a brand new work, it can be even more crucial.

Usually, I am invited to review the first public performance of a production (hello Basement Theatre) and very occasionally the second. Auckland Theatre Company gets two previews before the reviewers are called in. Seasons here are terminally short, so if you don’t get the reviewers in on the first night, it’s harder to capitalize on any good pull-quotes if the review doesn’t come out till the end of your run. We also don’t have the money and audience base to sustain a longer preview season. The result is that productions here are largely set by the time they get to the audience. If tinkering and changes do occur during its run, we critics have already cast our judgment (though thoughtful critical reviews can sometimes be used to inform changes the production team make over a season).

Is our development system fatal to new productions? Unless a production is universally praised on its debut, it can be difficult to remount a new and improved show. Your money has been spent, and if you’ve already been on in a major Auckland venue, it is difficult to coax audiences back.

I’ve been thinking about this after the critical reaction to The Deliberate Disappearance of my Friend, Jack Hartnett by Rochelle Bright and Not Pyscho by Benjamin Henson. Both programmed as part of Q Presents in the Q Loft, they are post-modern works that say a big fuck you to notions of truth and reality. They are ambitious, aesthetically slick, produced by edgy new companies pushing the boundaries of theatre in all the right ways, but in my opinion, come unstuck in their storytelling and sense of purpose.

Jack Hartnett had a “Raw: Projects in Development” showing as part of the Auckland Arts Festival earlier this year. Not Psycho was work shopped prior to rehearsals. This is healthy, and more than a lot of other new works get. But should the next jump be a major two week+ Q season? Is presenting partner Q Presents empowering enough development rigor? Are they ready for their audience? Are they ready to be fed to the critical sharks?

I admire the people behind the shows, and I am excited by the way they refuse to play the conventional theatre game. But I was hella frustrated by both. For Jack Hartnett, it seemed like the philosophy that Bullet Heart Club was a company that did shows with music meant that the question couldn’t be asked if the original music was actually serving the story. I thought the plot momentum came crashing halt each time Todd Emerson took his mic off the wall. Metro Editor Simon Wilson wrote that though “Bright’s idea to splice the genre of confessional noir thriller together with a musical is admirably courageous, too many of the songs feel like forgotten b-tracks”. Sam Brooks for The Pantrograph Punch argued that the show gets “quickly lost in the intricacies of its own plot that it forgets to let us into the story”. It pained Lumiere Reader’s Nathan Joe to write that “every inch” of the show was a disappointment.

Good stories ask big questions. As much as I was digging Todd Emerson’s performance in Jack Hartnett, or the Benjamin Henson brand of ebullient theatricality in Not Pyscho, I just couldn’t get a handle on the questions these productions were asking. I’m sure that the artists knew, but it wasn’t yet communicated to the audience of their shows.

What did Not Psycho the play have to say about Psycho the film and its cultural history? Not a lot. It’s Not Psycho after all, a mirror to reflect something else. So okay then, what did Not Psycho have to say about a Psychotic character living in Manchester in 1997? Again, not a lot. The whole thrust of the story is Edwin Beats’ pseudo-Bates remembering what it is he has done, but as I suggested in my review for Metro Magazine, the why is actually more interesting, and not engaging with that question enough is where it came short for me.  Sam Brooks thought all the elements were there to make a great show, “but Not Psycho is not a great show”. Nathan Joe asked in his review: “Does it mean anything?” “I don’t know” he concluded, “If there is meant to be some sort of social commentary about sex or violence in media, I think the show wildly misses the mark.” Did I leave with a greater insight? Not at all, but I certainly had a good time. So did Sharu Delilkan, writing for Theatre Scenes.

Jack Harnett had a question blazoned across its program:  “Let’s be honest – would you do it?”. As I mentioned in my review: Do what? Go overseas looking for a lady who is probably a scam artist? Commit company fraud to save this person being scammed? No, probably not. We weren’t given a way in. As Wilson concluded, “Jack Hartnett struggles to engage our empathy, and that leaves it floating.”

So what went wrong? Or more specifically, what stopped these shows from coming right? I have some theories. Partly it is a symptom of post-modernity; its endless remixing and distrust of truth and the objective. This plays into the narrative they tell. I don’t expect a solid answer, and I love a show that leaves itself open for some theorizing. But I do expect to have those strong questions. I also understand that there is an awful lot of pragmatism – you have a limited rehearsal period, those locked in season dates, and to get the show across the line, you gotta do what you gotta do. But would it help if they had more time in front of audiences before opening? If there was development funding to subsidize cheap previews theatre-makers could have more room to test their work, and make any changes they thought necessary. Cheap preview tickets would be great for audiences and students on low incomes, as well as a way to get the theatre community at large to come and see your show (and play a part in its development!), and general audiences would still wait for post-opening. Win-Win.

It is important to acknowledge that the critical response is not the only response, and Jack Hartnett for example posted many enthusiastic responses from audience members that the show and songs had hit with.

I also want to say, it is okay to fail. Bruce Mason had a great quote about this after his experiences with Awatea (which he ended up rewriting after its first stage season): “The right to fail is conceded everywhere to scientists, but not yet to artists… By signing one’s name to a piece, one becomes an accessory to the crime of authorship (or so I bitterly concluded)”. We shouldn’t forget that as well as being a playwright he was an influential theatre critic himself, so knows the game, but I think yes, failure happens, and is necessary. You never quite produce the show in your head (though sometimes it works out even better).

I am sure in retrospect that both shows will be important steps in sustaining long and successful careers of Rochelle Bright and Benjamin Henson. On the other hand, the productions should be given the greatest chance of succeeding and to have an ongoing life.

So this goes back to my questions around systemic issues in our theatre. Would there be value in doing a Cumberbatch? Is it better to get a professional critic in earlier or later? That is a question. How can venue and funding partners best support the debut seasons of new New Zealand work? That is the question.

Not Pyscho has one week left, and yes, I absolutely recommend checking it out. 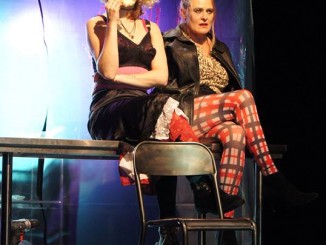 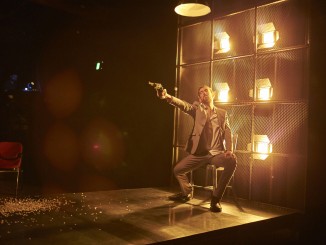 1 Comment on Scene by James: The Death of New Work