All in the Family [by Sharu Delilkan]

Cyan Corwine firmly believes that that you CAN make a silk purse out of a sow’s ear.

Her motto is that you can perform miracles with minimal expense, if you’re willing to think outside the box.

The creator of Dialogue With A Mannequin has made her mark in the industry creating sets and costumes on a shoestring budget.

In fact only recently she received a call from one of NZs major Television Networks asking her to do some set design. However she says she knew her reputation had preceded her when the conversation began with “We don’t have any money but…”

For the past seven years she has worked professionally as a costume designer, puppeteer, performer and general creator both here in New Zealand and New York, USA. 2011 saw Cyan work side-side in the art department and on stage with well-known comedian-husband Steve Wrigley on TV3’s the Jono Project and the hit comedy festival show Kevin the Musical.

Although Corwine doesn’t always want to be known for creating something out of nothing, that is exactly what she has had to do with Dialogue With A Mannequin.

Wrigley can attest to that: “A lot of what’s being used on stage is from our home.”

Without giving too much away, Dialogue With A Mannequin follows a young girl in her whimsical journey towards adulthood – learning to look inside rather than out, while she stumbles and strides through life. The flights of fancy that play out in her mind spill onto the stage and give the audience a chance to crawl inside a person’s misfires and musings, that usually lay hidden.

Starring Cyan and her younger sister Lyla, the show is the result of a series of poems, based on self-discovery, that she wrote years ago.

“I realised after a while that I was seeing it as a visual piece, not just words on a page. That’s when I knew I had to do something about this dead weight of an idea that I had been carrying around for years. Right from the start I wanted it to be a two-person show. So it’s been great having my sister, who’s 10 years younger than me, around to collaborate with,” says Cyan.

Dialogue With A Mannequin is Cyan’s first theatre show where she attempts to apply her skills to her own vision and where she’s solely responsible for everything from set design, costuming and the artistic content.

In the show Lyla represents an extension of Cyan, a shadow of who she is, once was and hopes to be.

Coming from a dance background, this role has been perfect for the 18-year-old, who as result of this collaboration is exploring the possibility of doing something in the theatre world.

“Although movement is a big part of what I do on stage, it has been a very interesting journey working on a piece of devised work,” says Lyla.

The ‘all in the family’ approach also extends to Wrigley’s involvement as the producer where he acts as “the outside eye. It’s as close to being like Cyan’s clone, looking in,” he says.

Although the buck stops with Cyan she admits that she couldn’t have done anything without both Lyla’s and Wrigley’s support.

“They have made the whole process a lot less torturous and scary. They’ve made me brave enough to bring a little tickle of an idea to life on stage – something I definitely couldn’t have done myself.”

Dialogue With A Mannequin is on 21 March to 31 March at The Basement Theatre Upstairs. Details see The Basement. 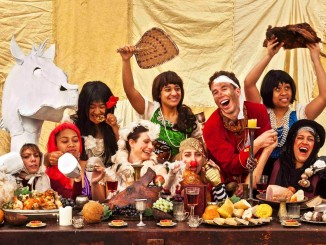