A Night to Dismember by Australian creator and performer Wil Greenway is a late Fringe entry that handily plugged a gap in The Basement’s schedule after previously advertised Truth was cancelled. Hopping across the ditch after seasons in Adelaide and Melbourne, Dismember has a true Aussie larrikin spirit and an off-beat sensibility that is worth seeking out.

The show is performed solely by Greenway, who is a mix of sensitive artist and an unmanscaped shell (the press release calls him a “hairy idiot”). He wears bare feet, a blue shirt and shorts, and a poncho with a cartoon picture of a shark, which he uses this hide his arms, and is a bit of a silly sight.

On first appearances the whole thing seems quite fantastical – Greenway’s character loses both his arms after two separate incidents with the same shark, loses his girlfriend Liz, befriends an asteroid named Jerry, goes bush with a legless man named Filthy Kevin, and so on. It’s a “big fish” story that keeps expanding in its vivid ridiculousness. It remains however unconvoluted, and one of the big factors that makes this story work is that it retains its own inner logic, and keeps returning to events and characters already setup.

One of the nice elements in this story are the back stories that Greenway reveals about the characters he meets along the way, such as Jerry the asteroid who feels he is always outclassed by his elder brother. Deeper themes and connections can be perceived. The men in the story are all dealing with their own sense of loss, frustrations about their lot in life, and dissatisfactions with how they perceive themselves.

This material would sink rather than swim in lesser hands – sorry – stumps. Greenway is a clever weaver of words and spinner of yarns; he acts his story with a great clarity of voice and wry understatement. The writing is a churn of high poetic imagery, pop-culture and the mundane. The cerebral humour in the show, much of it low key, is agreeably concentrated rather than of broad appeal.

With all that has gone before it, the ending is curiously – and somewhat disappointingly – conventional. I won’t spoil it here, but it suggests what we truly want – or think we truly want – is a cliché for a reason.

While the surface story is, frankly, hilarious bullshit, what emerges is a certain way of observing the world: as a ‘shark eats man’ sort of place. It is unjust, random, you are up against it, and other people/sharks can be real assholes. Dismember rewards on both levels: as an imaginative tall story and also as in illuminating a state of being that we all can feel sometimes.

A Night to Dismember plays as part of the Auckland Fringe Festival at The Basement until 2nd March. More details see The Basement. 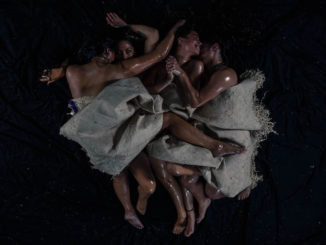