Two women, a silver survey machine with the power to turn back time, dozens of bananas, and a pair of letterboxes are the difference between knowing who you think you are and finding out you are a quarter Costa Rican. Get Out of My Letter Box builds a world of wild imagination, subterfuge, and familial loss out of the bodies of two excellent performers and a bucket load of cardboard boxes.

It is not often we get to enjoy watching female performers dance about the stage, revelling in their physical control, playing for the laughs without the comparison or pressure of masculine clowning and comedy. Under the guidance of Ruth Dudding, Katie Burson and Beth Kayes expertly display a love for play, for physical clowning, and for pulling on the heartstrings of their audiences.

Alexia (Burson), a young ex-circus clown and madcap inventor searching for her birth mother, and Hope (Kayes), a fairtrade enthusiast and banana importer from the Americas who plans to change the world, find themselves neighbours (2A and 2B), enemies, friends, and finally family as they navigate property lines, Hope’s banana business, and Alexia’s 100 plus question survey. The characters, which at first seem overly exaggerated, grow into deeply empathetic, viscerally real women, helped by the contrasting presence of hilarious secondary characters such as Burson’s superb turn as a ‘corporate prick’ in a pink blazer.

It is Burson’s Alexia who motivates much of the action. Alexia possesses a survey machine which happily contravenes everything we know about the physical world, bending the laws of space and time. The machine’s functions appear to include excessive vacuum, pulsing energy, manipulating bodies in space, turning back time, and turning characters in and out of themselves. It brings an atmosphere of magic and wonder which, when coupled with Emi Pogoni and Thomas Lambert’s quirky sound design, has the power to transform the Q Theatre Vault from black box into a complete world.

This world construction is supported by Burson’s lovely audience interaction which is internally justified by the announcement that one block of the audience is 3A and the other 3B. At one point in the show Alexia comments ‘What a large family!’ drawing laughter and instilling a sense of community in her audience. Burson and Kayes’ employment of clowning and acrobatics continues the fluidity of physicality and space. Moments of repetition, of stretching, flowing, and gliding, are all part of the physical vocabulary of the universe in which 2A and 2B sit. The laws of this world are playful and mutable, the brick letterboxes at times moving, becoming a womb, or endlessly spitting out mail without ever needing a mailman.

It did take a moment to sink into this world. With our imaginations suffocated by the hyper naturalistic thrall of television, the opening moments were a shade close to a children’s programme in the initial elements of direct address, clowning, and fantastical props but quickly this childishness becomes the show’s charm. This show about a daughter searching for her mother deserves to be told with all the magic of a bedtime story and all the majesty of a play that reveals something of human nature back to its audience.

Get Out of My Letter Box is a delight that reminds us that theatre time ‘is different to earth time’ – that on stage you can move between different bodies in across vast times and places, that in the theatre you might find someone you have lost, and that a simple prop can become the key to finding out who you are. 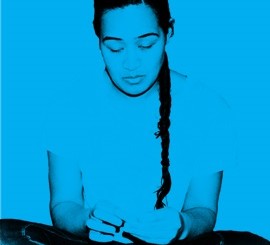