Herstory is the opening show of the Rangatahi Festival at Te Pou Theatre. Under the direction of Zandra Ah-Jay Maepu and support of The Creative Souls Project, the show combines eight emerging actresses as they each share their stories through monologues, poetry, dance and song.

Alana Tele and Kirilayla Dhillon both explore their cultural identity through their stories. Tele’s story highlights her Samoan grandmother and the countless growlings she would give her children and grandchildren. Tele reminds me of a younger version of the afakasi poet Grace Taylor because she expressively utilises spoken word and monologues, proving to all – and importantly to herself – that she is special because she comes from two polar opposite bloodlines. Dhillon explores her Indian culture and delves into a story of the courage to confront a cheating husband and the decision she makes to keep her family together.

Poetry is used by Te Kowhai White and Emily Muli. White performs her poetry in the spoken word form with the use of her body. The movement is strong and this time I’m reminded of a younger version of the artist Jahra Rager Wasasala, known for her performance poetry and the use of her entire body. White’s physical performance is superior to the text, and she needs a stronger poem to match; the rhyme scheme forces her poem to contain poetic lines that don’t serve the purpose. Muli’s poetry has some powerful lines about empowering women to be themselves, but also occasionally overuses rhyme too. Nonetheless, Muli’s performance (as both the opening and closing act) is beautiful as her poem threads everyone’s pieces together, creating a circular ending with the beginning – after a fall, we pick ourselves back up and go at it again.

Sherydon Te Tai is an amazing soulful and bluesy singer. In her first performance, she is accompanied by Ella Mavaega on the guitar (who plays throughout the show) and it’s beautiful. When Te Tai comes out twice more to sing on her own, she plays her own guitar which becomes a shield and her beautiful voice is hidden behind the comfort of having the instrument. I sit in the front row, and I make a lot of effort to try and listen to her.

Tua Leupolu proves to be a great singer as she explores the many hats our Samoan mothers wear as wives, sisters, mothers and work colleagues. As she struggles to find the one thing that defines her, in the end she accepts that her role as a woman is multifaceted. Maggie Tulisi also explores the Samoan culture through her love to siva, because, when she dances, she carries not only herself but her entire family with each movement. Of all the acts, she is the most nervous and on occasion forgets her lines. Her performance is forgivable as it is full of heart, and also reminds me that she’s human too. So even through our mistakes, we learn from them and get better, making her a strong woman also.

The show has a lot of potential for development. Although the nerves did get the best of most of the performers, I leave thinking about the lack of female-driven stories (both Pacific and Māori). For a change, it’s nice to have a show where I can watch stories about my nieces, sisters and mother on stage and appreciate them for everything they do. This show is also a great example of the young and emerging talent we have in Auckland and I look forward to the rest of the Rangatahi Festival.

Herstory plays as part of the Te Pou Rangatahi Season until 17 February. 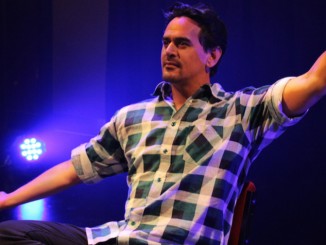