And they play guitar too [by James Wenley]

They begin with a bold conviction: “Love will break your heart”. It’s an idea – and lyric –that Midsummer repeatedly returns to, as the play’s lovers wistfully sing the phrase over their own spare guitar accompaniment. At the first this seems awfully unsentimental, but there’s something awfully romanticised about this idea too, that love isn’t worth doing without the accompanying pain. It’s a fitting paradox for a show that strums between the realist and the romantic and you are not always sure which side it’s going to fall for.

Going into Midsummer, I had picked up two key ideas from the marketing material and interviews.

1)      This is an anti-rom com, playing against the rules of the standard boy meets girl fare, not “your archetypical Hollywood piece of fluff”.

2)      This is a Musical for people who dislike Musicals “No high kicks have been planned and jazz hands have been outlawed” says the Press Release. A necessary antidote (and company positioning) against the Wickeds and Chicagos of the end-of-year season.

Rom-coms I can tolerate, but Musicals are what I love. Just what kind of experience would play out in Midsummer?

Midsummer is the work of writer David Greig (Prudencia Hart, West End’s Charlie and the Chocolate Factory) and composer Gordon McIntyre (Ballboy) and debuted in Scotland five years ago. Silo, under the direction of Sophie Roberts, opted to keep the Edinburgh setting; the story is in intricately localised, playing out across the streets of the city (the program comes with ‘The Midsummer Guide to Edinburgh’ map). Actors Dan Musgrove and Aidee Walker sport endearing Edinburghian accents. Rachel Walker’s set emphasises patchworks off-colour bricks, graffiti, and grime, but the shiny screen printing quality of the design gives it the look of an idealized grunge Musical-fantasy.

Midsummer marks the summer solstice, a time of festival, later co-opted by Christianity, when spirits are said to roam. Shakespeare used it for one of his most famous tales, and Greig naming the female lead Helena is no accident. Here the mean streets of Edinburgh stand in for the fantastic forest, liberal shots of liquor are just as effective as the love-in-idleness flower, and strangers cum lovers Helena (Walker) and Bob (Musgrove) give themselves over to long midsummer days and short midsummer nights of reckless and sexually charged abandon. While there is not a second pair of lovers to complicate matters (although there are others in the peripheries of their backstories), there are no fairies to intervene and put things right at the end; this they must attempt to do on their own. There is also the fact that Helena and Bob end up at a Midsummer Night’s Cream fetish club on one of their late-night adventures, but that’s a story you must discover on your own.

It’s true that in some ways this isn’t the traditional rom-com. Helena, a divorce lawyer and last to marry in her family, convinces herself that she can’t be attracted to small-time crim Bob because popular romances dictate that there should be friction with her opposite; they agree on everything. Indeed, there is little conflict between the couple. The drama is sustained by their own internal conflicts and relationship hang-ups, as well as two key external plot-lines: Helena’s sister’s wedding, and Bob’s dealings with a criminal gang headed by a gangster named Big Tiny Tam.

In many other ways, Helena and Bob’s story is familiar, conventional, dare I say, unoriginal. They are two damaged souls at loose-ends, finding meaning in the (drunken) embrace of another. I’m reminded of Once, the 2007 film, and 2011 Broadway Musical about a guy and a girl finding love on the streets of Dublin, which also featured a guitar playing male romantic lead. Once the stage show is very paired back by Musical standards, with actors playing their own instruments, Midsummer with its two actors playing guitar chords is even more so. I guess there is something ziegesty about about this kind of story in that area of the world, although there’s a slightly unfortunate echo of Once’s Oscar nominated song ‘Falling Slowly’ with Midsummer’s ‘Slowly Falling’ finale. If these were siblings, Midsummer is Once’s ruder, cruder, and cheekier Scottish younger brother.

Despite the familiarity, the story is told with a freshness and vitality that it really doesn’t matter. Helena and Bob relate their love story after the fact, frequently turning to us to excitedly reveal the next plot point, or complication, or relate what the scene may look like as a Hollywood movie. Theirs is a tale that grows in the telling. In the opening, Helena and Bob go over numerous times exactly what Helena literally said, and what Helena really meant, in her first words in her approach to Bob, the scene playing out multiple times for our benefit. There’s a part where they relate what kind of storytellers they are: Helena focusses on the details, Bob focusses on the feelings. So together, they are the perfect narrative couple. Plus, Aidee Walker and Dan Musgrove are so utterly charming that you can’t help but fall a little bit in love with them too. When Silo first announced this show, Madeline Sami was attached, but its unfathomable to imagine any other local actors in these roles, Midsummer is carried along by their charisma, shameless humour and chemistry.

So then to the songs. This isn’t the conventional Musical in that these songs do not drive the plot. Nor do extensively open up the emotional worlds of the characters – Grieg’s dialogue does most of this heavy lifting. They exist outside as wry commentary, set up themes (“give me darkness, give me pain”), and border on being too-clever-by-half (the ‘Hangover Song’), but they get away with it. More a play with songs than an “anti-musical”, the story is strong enough that it wouldn’t lose anything if the songs were dropped, but it wouldn’t gain anything either. I can understand the marketing – the meta-narrative gymnastics of the script means that the idea of characters breaking into song is potentially less erroneous for non-musical realists who object to this sort of thing on principal – but the apparent divide and conquer musical theatre fan strategy is an unhelpful wedge. The people who would enjoy this story are those who enjoy love stories, songs or otherwise.

I’ll say this about the songs though: Midsummer realises how sexy an instrument the guitar can be. The best use of the music is when Walker and Musgrove are connected, singing to each other. They don’t sing for a beautiful tone, they sing for truth. “Love will break your heart”.

The first act is love at first sight, whereas the middle act – which gets caught up in a shaggy dog story of adventuring with an illicit wad of cash – doesn’t quite match our first impressions. With its early focus on comedy, the third act does surprise in its affecting and successful tilt to emotionality and a mature and deep outlook on the thirty-something neurosis and the possibility of reinvention. The ending does play (unlike Once) in the more conventional arena, and your satisfaction may lie in just where you sit on the romantic/cynic spectrum.

Love breaks your heart, but while it might remain unexpressed in lyric form, Midsummer shows what else it can do. Helena and Bob surrender their logic, their self-respect, their heads, and their hearts. Midsummer may very well get you to surrender some of the same things for you.

PS: Be sure to check the time of your tickets – some audience members didn’t seem to get their heads around the 8:15pm start-time on the Saturday night I reviewed. This lead to a whole row of people sneaking right past Dan Musgrove, who just happened to be attempting some awkward sexual positions with Aidee. Musgrove, thrusting at the opportunity, called attention to the embarrassed later comers, and once seated, announced that he was going to have to start again. This was one of the greatest laughs of the play, and I’d say one of the greatest moments in Auckland theatre this year!

Midsummer is presented by Silo and plays at Q Loft until 23 Nov. Details see Q. 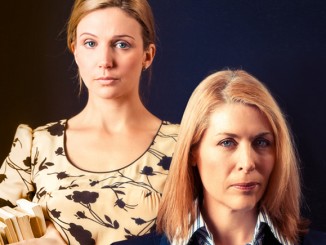 REVIEW: Between the Sheets (Royale Productions and The Large Group)