Working his way up [by Matt Baker]

What does it mean to be a National Treasure? What is the criterion for nomination let alone winning? And who is so humbly honouring themselves? Comedian, actor, and head-writer for Jono and Ben, Nic Sampson, addresses all this and more in his New Zealand Comedy Festival show, National Treasure. With the help of Sam Neill, Sir Ernest Rutherford, and Captain James Cook, Sampson explores his own successes and failures to determine how warranted a winner of this fictional distinction he really is.

Most of Sampson’s material is observational, and those who have seen his stand up in the past will recognise certain re-emerging themes; his family, his time as the yellow Power Ranger, his excursions, but Sampson has managed to continue mining the comedy within with hilarious results. It’s a perfect example of how you can find the humour in anything if you look hard enough. What Sampson has to his advantage as a comedian is his skill as an actor. Comedy is not simply about an idea that tickles an audience, it’s about delivery.  It’s not just about what you say, it’s how you say it.

While the National Treasure Awards setting provides a structural context to the show, it seems to be a replacement for narrative progression that doesn’t quite pay off, and while the characters – staples of some of Sampson’s previous work in solo shows and comedy panels – have tremendous comedic value due to Sampson’s skill as an actor, they do juxtapose his own stand up persona. The threads are loosely tied together, but Sampson has both the intelligence and comedic ability to develop his work further as one of the top New Zealand comedians of his generation. That being said, if being a National Treasure is about success in one’s field, Sampson is definitely a deserved recipient.

National Treasure plays at The Basement until May 16. For details see the Comedy Festival website. 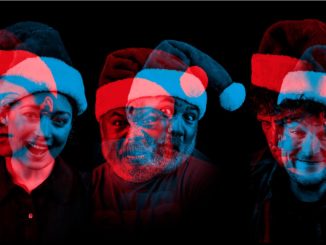