The theatre was electrically charged as we scrambled to find our seats. In fact my mate Liz and I ended up sitting separately because it was so full. Not to mention the fact that they added almost 6 new chairs stage left to accommodate the stragglers. Seeing the theatre packed to the gunnels was a great sight to behold, especially since the show has been running for more than a week.

Looking at the stage it was equally electric painted in a multitude of vivid fluorescent colours, complemented by the chorus’ multi-coloured t-shirts. And when the MC said “sit back and enjoy the show and laugh your bum bums off” you knew you were in for the ride of your life.

Sinarella, yet another feather in the Pacific Institute of Performing Arts’ (PIPA) cap as a joint production with Auckland Theatre Company, follows the sell-out season of Polly Hood in Mumuland.

The Pacific Island-take on the classic Cinderella, skilfully written by Goretti Chadwick and Sean Coyle, has the perfect effervescence to keep not only the littlies engaged throughout the show, but also the adults and teenagers alike.

At 75-minutes I thought the pantomime was a tad long. But if the kids can sit quiet and transfixed to their seats for more than an hour, who am I to complain?

The colourful set and costumes complement each other and helped create the cheerful and dynamic tone of the show from the get-go, thanks to Sean Coyle (set and costumes) and Lindah Lepou (costumes).

The live musicians stage left on the ground level – Joseph Taouma (guitar), drummers Italia Hunt, Aisea Latu, Kevin Mana-Daniel, Epine Savea and Walter Sipili – are the icing on the cake further enhancing both Tama Waipara and Joseph Taouma’s fabulous music choices. As with all PIPA productions the rich vocals from the chorus aka The Mice were angelic, almost gospel-like, sending chills up my spine intermittently throughout the show.

Local themes which included budgeting, corned beef, Instant Finance, The Online University of Otara and respect for parents, permeate the colourful dialogue. And the Samoan words peppered throughout really make the show a true slice of Pacific Island culture, giving the show a truly genuine South Auckland feel. Chur!
And of course the use of a silver jandal instead of the customary silver slipper, embellished the Pacific Island flavour of the piece.

The audio-visual media, which included ‘fazeboog’ and a newscast from Niva Retimanu projected on the screen, starring Vela Manusuate (Velarella), were clever devices that brought the classic tale into the 21st century.

Special mention has to be made to both Lindah Lepou (stepmum) and former NZ Idol winner Rosita Vai (step sister Povi and Duke’s mum Lupe). They showed great promise and I for one hope to see them back on stage again. Other stand out performers were Pua Magasiva (Fairy F.O.B Mother Ranger Guy), Taofi Mose (stepsister Pata and Prince’s mum Kuini) and Keith Adams (Bok Choy), who I might add was also incredibly beautiful. Adams’ scene where he tries to teach Sinarella (Lavinia Uhila) how to ‘work the house down’ is absolutely priceless!

All the dancing in the show led by choreographer Siaosi Mulipola was spot on, capturing the natural movement that epitomises Pacific Islanders. So real that it reverberated throughout the audience, making it impossible to keep still in our seats.

Once again Goretti Chadwick with co-directors Anapela Polataivao have outdone themselves. Their acute insight into the Pacific Island culture shines through making Sinarella a unique piece of theatre.

After all where else in the world can you get a authentic taste of slick Poly humor with a twisted take on a much loved Fairytale such as Sinarella? 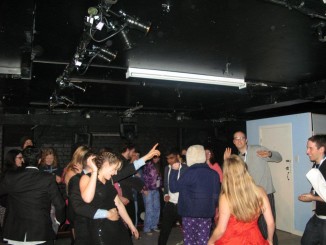