Devised from an eclectic range of hit pop songs from across the decades, I was pleasantly surprised with how well a narrative the collaborative team of Fingerprints & Teeth Productions and Dynamotion were able to create for the dance/theatre show Terror Island. Starring Lara Fischel-Chisholm as Lara, Jennie Robertson as Jennie, and Tom Sainsbury as Tom (Sainsbury), this trio of both devisers and performers have generated a plot that resembles the basic 90s teen-horror and has enough of a journey to sustain 50 minutes of fun.

Supporting our core cast are the hilariously goofy Kate Simmonds, the Blue Steel-faced Roberto Nascimento, and the peripheral gauging one-step-behind Dan Veint. The six come together and, even without their colour-coded uniforms, manage to create discernable characters, although I was confused once or twice as to whether the supporting cast were performing as back-up dancers or one of their own varied characters in certain sequences. Narrator Paul Harrop is aptly used and consequently relinquishes the actors of any dialogue whatsoever.

Choreographed by Fischel-Chisholm, Robertson, and Sainsbury, it’s evident by the end of the show which of them has the strongest background in dance. It’s unfortunate, however, that there was no outside eye to keep everyone in check. Lighting operator Chris Walker keeps things interesting with a range of colours that nicely articulate the style and rhythm of each musical sequence.

As with all Fingerprints & Teeth Productions, the show is at the mercy of Sainsbury’s wit and has moments of classic comedy. There’s nothing beyond the first layer of this production, but it doesn’t attempt to be anything more. It’s funny, there’s lots of dancing, and it’s only 50 minutes long. 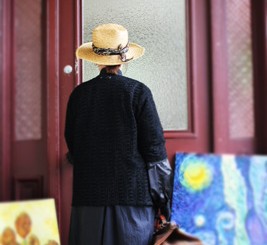