Once again The Basement proves its integrality to the Auckland theatre industry by picking up where ATC left off and presenting their first season of Young & Hungry, a programme in which performers and operators under the age of 25 are mentored by established writers, directors, producers, designers, operators, and stage managers. Dragonlore by Nic Sampson and Atlas/Mountains/Dead Butterflies by Joseph Harper could not be more polar opposite, and are consequently both perfect examples of the panoramic direction that the (entire) next generation of theatre practitioners can take the industry.

Sampson harmoniously integrates his distinct humour with the already surreal world of live action role-playing, and while it’s not a world with which New Zealand culture is entirely familiar, due to our own youth in comparison to the LARPing nations of Europe, it is an easily understandable and accessible plot device.

The cast commit to their roles in much the same way their characters do, delivering witty one-liners and ridiculous retorts with deadpan expressions or un-naturalistic exuberance respectively. Abigail Laurent and Holly Hudson relish the feminine strength that the world of LARPing offers, and Liam Hughes plays with the dichotomy of chauvinistic arrogance and sensitive protector in his roles as apprentice construction worker and ogre respectively.

Both Jarred Blakiston and Todd Waters struggle to work off each other, especially in the opening scene. Blakiston has a habit of presenting ideas in certain moments of his performance, but finds the right level of incongruity in his attitude towards the other characters. Waters, like the geek at the convention, is in his element when fighting for what he believes is right, regardless of how ridiculous it may seem to everyone else. Daley Winterstein plays with the eloquence of his dialogue, and although the ‘twist’ is by no means unexpected, Brittany Low’s Robert provides a nicely clever ending.

Director Curtis Vowell clearly understands the limits of education and experience that inevitably come with youth, never pushing the cast beyond their means, but maintaining a distinct level of professionalism and craft. Set design by Nur Izzati Khairuddin, Vianney Vincent, and Kenah Trusewich, mentored by Andrew Foster, and costume design by Wan Noor Farah Wan Shamsuddin and Laura Macuhline, mentored by Charlie Baptist, both aptly reflect the DIY Kiwi style prevalent in Sampson’s writing and the financial insufficiency of his highly imaginative characters.

Harper’s script is filled to the brim with weighted dialogue; nearly every second sentence comes across as a Western translation of a Confucian statement, but not as arrogant pontification. Instead, it is shrouded in the uncertainty of its protagonists, a perfect example of how theatre should raise questions, not provide answers. There is simply not one superfluous word in the entire text.

Directors Shadon Meredith and Amelia Reid tackle the ethos of Harper’s script with great vision, identifying the undulation in the narrative that might not otherwise come across without a heavily stylised presentation. There is also a clear understanding of the purpose and benefit Young & Hungry has for young theatre practitioners who are intent on developing their craft, with many of the scenes comprised of familiar drama school exercises.

The split casting, which often courts disaster, works advantageously, giving universality to the dialogue and generating dramatically ironic moments of humour. Crystelle L’aime, Pearl McGlashan, and Saraid Cameron, each bring out the frustration of Phoebe without making her a dislikable character, especially in comparison to the poetic wonderment of Rhys, which is nicely pitched and maintained by Lane Twigden, Matt Smith, and Hayley Brown. Amelia Reynolds steals her scenes as the world’s most optimistic plumber, with further humour from Freddie Graham’s all too familiar Greenman. The comedy is nicely juxtaposed by Andrew Gunn and Melody Knapp’s Stoneman, however, their perspective on life and the general bleakness of the script is never depressing.

Riley Mooney and Tyler Preece’s lighting design, mentored by Peter Davison, is beautifully structured and operated, with strong spots and sidelights, finding an ironic darkness in its execution, and sound design by Marshall Smith contributes a haunting score, which reflects the bittersweet beauty of Harper’s world. As Jimmy Heazlewood’s Rand-like Atlas relinquishes his burden of Albertine Jonas’ seductive The World, I can’t help but feel confident that New Zealand theatre is safe in the hands of this generation of theatrical practitioners. 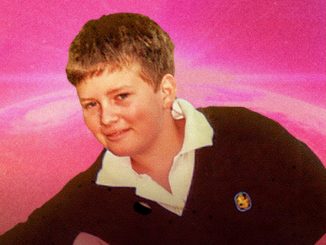