I knew that if I was going to do New Zealand Theatre Month properly, I needed to travel beyond just the theatre of Tāmaki Makaurau.

So last week I flew to the capital for one night. Fortunately, I did not have to choose between the Cookie Time or the Cassava chips, but was able to fit in Wonderful at BATS and Modern Girls in Bed at Circa Theatre.

The plays – in content and writing – present generational contrasts in New Zealand theatre.

Wonderful, directed by Conrad Newport, is written by New Zealand playwrighting stalwart Dean Parker, whose first play for the stage, Smack, opened in 1974 and was heralded by Bruce Mason as a “major breakthrough in New Zealand drama”. Parker has a reputation as our most politically orientated playwright against contemporaries who have otherwise struck for broad appeal. Recent titles give a sense of Parker’s interests such as Baghdad, Baby! (2005) and spy thriller Midnight in Moscow (2011). He also adapted Nicky Hager’s expose of the National party under Brash in the The Hollow Men (2007) for the stage (our current Deputy Prime Minister was visibly beaming in the audience the night I attended the play’s Auckland season). Parker’s latest work, Wonderful, (which the programme reveals has in fact been gestating since Parker saw a play called The Christian Brothers by Ron Blair in the 1970s) is a solo show about a Marist Brother teaching a class of school students in Napier in 1959.

Modern Girls in Bed, directed by Rachael Lenart, is presented not only as part of New Zealand Theatre month, but also WTF! (Women’s Theatre Festival), Suffrage 125 Whakatū Wāhine, and even the Katherine Mansfield 130 celebrations. It is written by Cherie Jacobson and Alex Lodge who together with Ed Watson founded the full.stop.theatre company in 2007. In Modern Girls in Bed we see generational tensions between Gen Z and Gen X, but the writers reach further across time when a number of prominent women from Aotearoa’s past pop up in the titular bed. 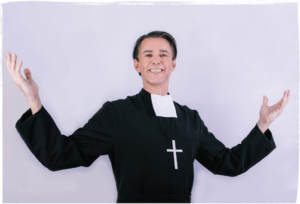 BATS Theatre, established in 1989, has been around as long as I have (coming up 30 years), but the building has had an even longer history of performance, including productions by left-wing Unity Theatre from the 1940s to 1975. BATS reopened in 2014 after it was able to take over the long-term lease and undertake a major refurbishment, adding the upstairs Heyday Dome as a performance space, which is where Wonderful is playing.

On the wall are two portraits: of Pope John XXIII and the heard of the Marist order. But perhaps portraits of Yul Brynner and Deborah Kerr would also have been fitting. Wonderful begins with a rendition of ‘Shall We Dance’ from the musical film those two starred in The King and I. Andrew Laing as Brother Vianney treats the song as a prayer. As he gets to the chorus he grows in spiritual ecstasy, twirling round the room as if his cassock was a fabulous ball dress. Religion was his calling, but the golden age of musical theatre is his devotion.

I think I would have loved someone like Vianney as a teacher. He resists getting his class to open the curriculum books as long as possible, preferring instead to educate them with a detailed account of the films he saw over the weekend – his summary of Rear Window, starring his favoured Grace Kelly, is a delightful moralistic twist on Hitchcockian suspense. Laing’s Vianney has the piercing you’re-in-trouble-now teacher look down, and rages at the “devil at work” when he discovers a student has bought inappropriate fleshy collector cards into the classroom. But he never stays in this mode for long, crumpling into his eminently soft-hearted demeanour. Vianney cultivates a student-teacher relationship of a confidant, revealing aspects of the adult world that he says he shouldn’t really be telling them.

Parker’s script gently evokes a never-quite nostalgic impression of New Zealand’s past from the Catholic perspective. The roll call reveals surnames of good Irish stock. It was a time when aspiring to become the head of a Government department was viewed as the ideal ambition. Vianney frames Catholicism as a target of oppression in New Zealand. He goes on ranting tangents about Henry VIII and lust, regales the class with conspiracies, and rales against the co-option of Guy Fawkes traditions. Fawkes was a Catholic – “you think about that” he impresses on his charges.

Due to Vianney’s roundabout storytelling, Parker’s script also can seem overly meandering – it is not always clear if it is Vianney, or Parker, that is getting taken away by a particular tangential anecdote. But as we spend more time in the Brother’s company, we realise the deep pain that he holds in his heart, that he’s not really where he wants to be. It comes out when he dismisses his fellow Napierites as cultural “philistines”. It comes in his glorification of Hollywood, his tales of being in Sydney as a company member of touring theatre productions for ‘The Firm’, the famous J.C Williamson company (which regularly sent shows to New Zealand). Vianney epitomises the prevailing view in the period that culture was situated elsewhere.

With Vianney’s relative inappropriateness with his class, and the Church’s shameful history of abuse, there might have been a version of this play where events take an even darker turn. Instead, Parker’s concern is giving us a portrait of a man at odds with the country’s puritanical masculinity.

The contrast between the singing and dancing priest that opens the show and Vianney’s quiet retreat into himself at the end, when his memories and regrets overwhelm him, is profoundly moving and a stunning performance by Laing.   The show reminds us of the ways that art can provide much needed escapism and comfort. Vianney’s enthusiasm for the movies, especially the movie musicals, offers a healing respite from his circumstances. The classroom too is his refuge; his students (and we the audience) come away better having received Vianney’s golden age musical guidance. 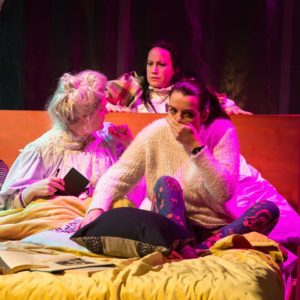 The title and subject matter of Modern Girls in Bed slyly evokes Caryl Churchill’s play Top Girls – one of the seminal works of twentieth century drama (the innuendo of the titles perhaps most explicit in the Kiwi play). A key feminist text of the 1980s post-second wave feminism, Top Girls’ Marlene placed herself in a pantheon of women achievers: the first Act famously imagines career-minded Marlene hosting a dinner party with Pope Joan, Dull Gret, Lady Nijo, Patient Griselda and Isabella Baird. Act Two and Three take place in Marlene’s workplace and home where Churchill reveals the limits of the ‘have it all’ mantra, demonstrating the futility of a capitalistic feminism that replaces one system of oppression with another.

Jacobson and Lodge pay homage to Churchill by having 18-year-old Ally (Maria Williams) and her honorary sister Petra (Isadora Lao) interact with some of Aoteaora’s great women of history. Ally has decided to hold a ‘bed in’, stating she is going to go to bed for the rest of her life as an act of resistance, and has taken with her a pile of fading biographies. Soon the subjects of these books are in the bed with her in the flesh, and the bedframe creaks with the combined weight of their mana.

Who do Jacobson and Lodge choose to bring to dramatic life? There are the expected choices Katherine Mansfield (Alex Lodge) and Kate Sheppard (Amy Tarleton), who regularly feature in our television and stage dramas (Mansfield is also the focus of Circa’s concurrent show, Bloomsbury Women & the Wild Colonial Girl and That Bloody Woman gets some intertextual nods). But they are also joined by figures who should have higher awareness in our national consciousness: Heni Pore (Bronwyn Turei), a leader of great mana who was a warrior, teacher and interpreter; Akenehi Hei (Maia Diamond), a pioneering nurse; and Helen Hitchings (Renée Sheridan), who began New Zealand’s first modernist art dealer gallery. These choices offer an opportunity for wider attention to inspiring figures from our country’s past.

Having Ally and Petra interact with these characters in bed is a very appealing conceit. Jacobson and Lodge tease out historical and gendered perceptions, directly linking the concept of the ‘rest cure’ with contemporary ‘self-care’ and the judgments of whether such things are self-indulgence or radical acts. On the 125th anniversary of female enfranchisement, it is notable that Modern Girls’ Sheppard reflect that it was a “hollow victory”, got across the line due the cynical opportunism of Premier Seddon. Ally and Petra view Sheppard with some discomfort when they realise the “problematic” intersectional limits of her first-wave feminism, while Sheppard reacts with some horror on hearing about Jacinda – family should come first. The young adults, meanwhile, find the chain-smoking Katherine Mansfield “kind of annoying”.

Ally and Petra come across as self-aware parodies of Zillenials (born from 2000), liberally peppering “actually” throughout their speech, for example when Petra learns of John Lennon’s problematic history, she responds that “my world view has actually just shifted”.

The first act is an amusing if sometimes scattered romp through the bedsheets of local history, but Act Two uses this foundation to complete a greater dramatic purpose. Cleverly, the historical wahine reappear as contemporary analogues set at a remove: our $10 political activist, for example, becomes Aunty Cate (Amy Tarleton), a “born again” lesbian and Green MP. A family crisis has precipitated the arrival of Ally’s three aunts to the house, and we learn a wider poignant context around Ally’s motivation to take to bed. Modern Girls expands into an equally comic and moving story of grief and family resilience.

Modern Girls shows us how theatre can speak insightfuly to our present moment. Lodge and Jacobson have given us the ideal show as we mark Suffrage 125, looking at where we’ve come from, and where we still need to get to. They present a keen awareness of the ‘modern girl’ coming of age under fourth-wave feminism.

And just as Lodge, Jacobson, and their creation Ally also look to their forebears for present inspiration, so too does Modern Girls have the potential to inform future theatremakers and scholars, presenting a fascinating window into our 2018 moment and concerns – which will in turn help bring their future moments into starker relief.

In their different ways, Wonderful and Modern Girls in Bed demonstrate the pleasure of theatrical time travel – and all I had to do was go to Wellington to experience this. These new plays are both deserving of longer lives, and I hope there will be tours and other productions in their futures.

Wonderful plays at BATS until 15 September.
Modern Girls in Bed plays at Circa Theatre until 22 September.

Discover what else is on around the country at the New Zealand Theatre Month website. 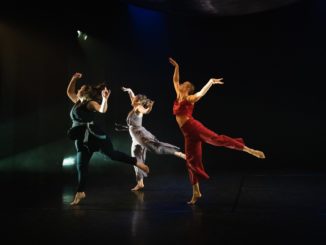